Over the past few months I've written about both using seven inch tablets as note takers and the use of Dropbox as an active filestore.

As an experiment, I've invested in a no name seven inch tablet which came bundled with a usb keyboard in handy case (all for around $125 including additional memory and a car charger) 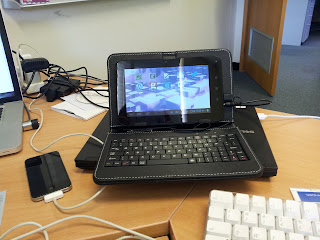 I ordered the device through ebay – delivery took longer than expected, not due to any problems at the seller's end but more due to the postal authorities at Shenzen rejecting the package first time around, and taking two weeks to do so. The second time the vendor sent it EMS and it arrived in under ten days.

As a consequence, I've only just received and configured it – I still need to use it seriously to see how useful it is in practice.

However, its not just me that's discovered the power of no name Android tablets from China. Last weekend we went down to the coast and stopped off in Bateman's Bay to pick up some bits and pieces. We were a bit later than planned and most of the stores were winding down but Aldi was still open.

While I was lining up to pay for our salad and fruit I noticed that they had a list of this week's specials which included a nine inch Android tablet for around two hundred bucks – eminently affordable and less than I paid this time last year for my zPad ...
Posted by dgm at 10:18