Earlier today I posted the following thread on twitter 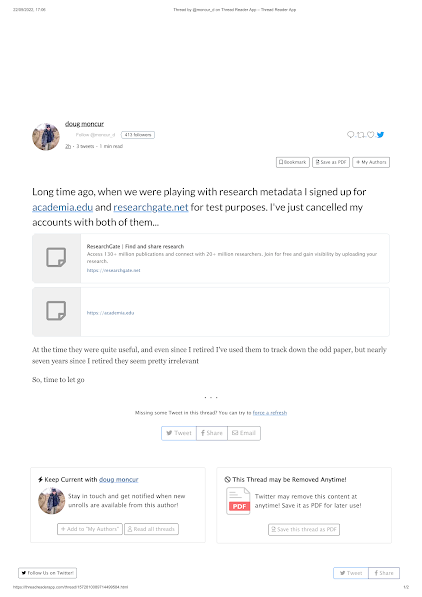 The backstory is that when we were working on the ANDS funded MS03 metadata stores project we started looking for examples, especially we were also working on the related Data Commons project at the time.
So I signed up for these services (I think I also signed up for Mendeley, but if I did I've lost my account details) to see what they actually gave you.
I've always thought that, as well as eating one's own dogfood, ie using one's own systems and software for real, it's important to experiment with alternative solutions and products - after all they might provide something better.
At the end of the project I should have got rid of the accounts, but who does?
And I did actually use them to find some research on something I was looking at later on, but to be honest they weren't really that useful.
Well, I've been gone from the wonderful world of work for nearly seven years now, so I decided that it was time for a Mari Kondo moment and get rid of things that no longer sparked joy.
So I had a search through my Google password manager list and found quite a few sites I had accounts on I'd completely forgotten about (like Xing? Really?) and I made the effort to go and login to the site, delete my account, and then delete it out of the password manager.
Probably something worth doing every so often ...

The end of cursive and the end of history ...

I've just tweeted a link to an article  from the Atlantic bemoaning how, in the USA at least, university students can't read cursive handwriting

USA: The decline of cursive instruction in schools has left students unable to parse archival documents written in script, @DrewFaust28 writes. Can you study history if you can’t read cursive? https://t.co/2mAcWDNcZa

That gave me some pause. A generation who can't read cursive?

More importantly a generation to whom notes are written on a phone, an iPad, or a laptop, something that makes them automatically ephemeral, just as emails are fundamentally ephemeral.

In fact all electronic records are ephemeral.

Having spent a good few years of my life dealing with digital archiving of data, code, software, digitised data etc, I can tell you that digital records are ephemeral.

Left to themselves digital doesn't last, and it takes considerable effort to make it last in terms of personnel, equipment and cash.

So, we face a world in which there will be no records, well other than the official ones that someone at the time thought worth preserving, and other people have continued to think worth preserving.

We face a world with no diary entries, no notes about off the record conversations, no letters between friends and lovers, no trial transcripts, nothing.

And we will be impoverished for that.

And it's not as unlikely as it sounds.

Shortly after the Iraqi invasion of Kuwait, a Kuwaiti refugee turned up at the university computer centre I was working at. He had heard that we offered a best efforts data recovery and conversion service, and he had this very battered DAT tape that contained a backup of his work that had been stored on a server in Kuwait University.

The Iraqis had been going to steal the server, but when they got it outside, they decided to use it for target practice. End of server.

Fortunately tape turned out to be readable and in a fairly standard format and we got most of the man's data and paper drafts back for him. If we hadn't, he'd have lost it all.

Most hardware failures are not so dramatic, but the consequences would be the same - any content management solution represents a single point of failure - and in my experience most in house solutions are exactly that - despite paying lip service to resilience in practice there is never enough funding to do more than a periodic backup.

This is why we know (among other things) about the Nazi atrocities in eastern Europe. Consummate bureaucrats  they filed paperwork and reports meticulously until the very end, meaning there was simply too much to be destroyed. If they'd used a content management system there's a lot that we simply wouldn't know.

Now I'm not saying we shouldn't digitise records. I for one enjoy working with digitised sources, and without them would not have been able to have done my family history stuff, and I do get a buzz from reading 250 year old parish records while sitting at my desk on the other side of the planet, and almost as far away from the records original location as possible.

However, let's be clear, digitisation is not the same as preservation - without measures to ensure resilience and continuity, at best it's a method to widen access.

As for an inability to read cursive? I'm less worried about that - people can learn.

I know this from personal experience as I did a short course on eighteenth century Scottish handwriting during the first year of the pandemic to better read church registers and records when, during lockdown, I turned to family history to keep my brain active.

Just as when, all these years ago, I learned some Russian and learned to read and write Russian cursive script.

And a few years ago, in the middle of frenzied traffic in roadworks at  a Greek freeway intersection I made an important discovery, I'd assumed J could read Greek road signs because she could read Byzantine text on mosaics etc,

At a critical moment while trying to work out what exit lane we should be in, I discovered that while art history had given her the ability to read upper case Byzantine inscriptions,  J couldn't read lower case Greek letters meaning she couldn't read a temporary diversion sign that was only in Greek, but then, hey,  it was Greece and abrupt changes of lane are the norm ...

It's just simply a case of no longer assuming familiarity with cursive script and making the ability to do so a prerequisite ...

Back in February, I blogged about how I was now saving data directly to OneDrive rather than backing it up and uploading it at the end of the day.

And this certainly has proven to be a robust solution, except last week when the internet was off again.

Like last time, the router was in a locked room to which I didn't have a key, which meant I couldn't intervene. Just to make matters worse the router said that it was there, but refused to connect to the NBN.

My solution, after trying to use my phone as a router (bad idea, OneDrive synchronisation chews batteries) was to turn off synchronisation and revert to the original methodology of saving copies to both my computer and a USB stick.

That worked well, and all I had to do when I got home was power up my documentation laptop and restore synchronisation, and a gigabyte or so of data later we were all good.

Today, when I came in, the router was still being stupid and was still inaccessible. However I'd come prepared, and brought my little 4G travel modem in as a backup.

That just worked - apart from a little bit of a lag (and only sometimes) when saving a document you couldn't tell I was running over a 4G connection rather than a standard NBN connection.

As for data usage, I've gone through a Gigabyte this morning, and I'll guesstimate that I'll use the same this afternoon, which is not too bad at all 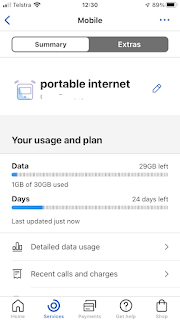 Having gone on about e-paper devices earlier, I finally cracked and bought myself an e-slate.

The sticker price in Australia is around $50, but I found an online grey market retailer who had the same device for $25 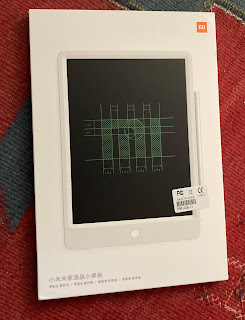 When it arrived, one of the hazards of buying from grey market importers became apparent - this was the Chinese domestic market model, not the export version and the packaging and manual was only in Chinese.

For a more complex device this might be a problem, but the device is so simple you really don't need a manual.

You just pick up the stylus and write on it, doodle on it, draw pictures, wipe the screen when done 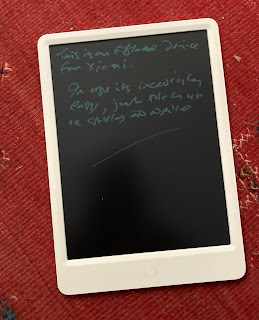 It's incredibly nice to write on and the whole cursive writing process flows evenly, which seems to have the strange side effect of making my usually illegible handwriting less like the work of a drunken baboon and more like something that might actually have been produced by a human being.

How useful it will be in the long term I have no idea, but it's certainly an interesting device ...