Yesterday was ferociously hot, so I did what I usually do when it’s too hot for gardening, and played with some old hardware, this time J’s old Lenovo IdeaPad K1, an android tablet dating from late 2011.

In its day it was pretty slick, slicker than the zPad, and a pretty nice bit of kit with an excellent screen - being an artist J spends a lot of time looking at pictures and illustrations - but it was a bit heavy to hold, and even though we'd invested in stand cum charging station for it, it could be a pain to use for extended periods. Not only that, it would occasionally lose its network connection, or more accurately not recover gracefully when our router flipped from adsl to the backup 3G connection, so eventually it was replaced by a Samsung Galaxy.

By the time it was replaced, Lenovo had more or less abandoned the K1, but had unusually, provided an option to upgrade it to an unsupported version of Android 4 - the K1 having originally shipped with 3.2.

We never followed that up at the time, as the only thing I used it for was downloading podcasts, and gPodder was happy with things as they were.

In retrospect, this was probably not such a good idea, as the links to the generic version have now (understandably) disappeared off of Lenovo’s website.

Well, no modern browser, but Opera mini installs and runs quite nicely.

The previously installed wikipedia, gmail and twitter apps still work as does inoreader - an rss feed reader. You can’t, of course install anything recent, which means no decent text editor or anything like that.

But, given that most of what I use my  current tablet for is wikipedia, email and twitter, plus a bit of rss feed reading it isn’t a disaster. Not having access to OneNote or Evernote is a bit of a pain, but were my existing tablet to unexpectedly come to a bad end it would be good enough for a stopgap, which isn’t too bad for a device over six years old running an old operating system ...
Posted by dgm at 11:42 No comments:

One of the tasks in documenting artifacts as part of the project is transcribing labels on the bottles of materia medica in the pharmacy.

Mostly this is fairly straightforward - the labels are on the whole beautifully stencilled in india ink on good quality paper, and so while they may be a little yellowed they're perfectly legible. It's the early twentieth century ones that are more of a problem - cheaper paper and sloppilly writen in faded fountain pen ink.

To be sure they have their peculiarities - the extensive use of Æ  in nineteenth century pharmaceutical latin and outdated abbreviations like TṚ for tincture, but it's all fairly straightforward.

Until a couple of days ago, when I came across the following 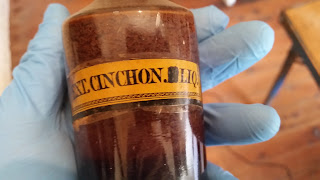 where the label had been corrected at a later date - if you look carefully you can see what appears to be an extra L which has been blotted out in a different thinner ink. presumably at a later date.

This of course raises an number of questions about transcribing the label - should I transcribe the label as it was meant to be read, or include the blot, or transcribe it as the original text and note that the first L had been blotted out at (presumably) a later date.

I decided to go for the middle route and transcribe the label as you would read it today, blot and all.

While I knew about the Text Encoding Initiative and the Leiden Epigraphy conventions, which I'm using to indicate missing or illegible characters, I didn't know about blots.

My first thought was to simply insert a unicode blot symbol, except there isn't one - as a stopgap until I could spend more time with Google I decided to use the cyrillic Zhe (Ж) as

I guess I could have used the unicode block character ( █ ) but as I also keep a longhand paper workbook in parallel with the transcription spreadsheet Ж seemed a better choice.

I started off by searching for things like 'epigraphy blot' without much success - well I guess stone inscriptions don't have blots, although they do have erasures, so I don't think it was that silly a search.

Changing the search terms to something like 'TEI transcription blot' was more useful and produced a lot of information on how to represent blots in XML as well as important questions such as whether it was a correction by the author or a correction at a later date and differentiating between the two, as well as what to do if you weren't sure.

The only problem was all this information was for creating XML markup, and I was transcribing the labels to an excel spreadsheet using unicode, and I needed a standard pre-XML way of doing this that was going to be intelligible to someone else.

In the end I found the answer in the epidoc documentation maintained by Stoa.org. Under erased and lost  it not only documented the TEI XML but also referenced previous pre XML paper technology conventions, in this case [[[...]]], which was ideal.

This little journey has raised a whole lot of questions, including should we be using TEI XML encoding for the labels.

The short answer is probably not, unicode in excel plus some standard notation is more than adequate in 99.9% of cases, and the whole majestic edifice that is TEI seems like complete overkill, but certainly this little diversion shows the importance of discussing and agreeing on transcription standards before starting on something as seemingly straightforward as a sequence on nineteenth century materia medica labels ...