The Dow's pharmacy documentation project is under way (again) 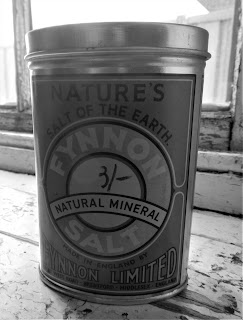 You might remember that nearly three months ago I wrote about how the Pharmacy Documentation project was restarting.

As always in these uncertain times it took a bit longer than expected, but today I finally was able to take my gear in and document some artefacts.

Only three mind you, most of the day was spent using what I'll call the dogfood tablet  - my recently acquired 7" Lenovo e Tab - to access all the pre lockdown reference photos on one drive and check for changes or deterioration in any of the artefacts I'd documented previously.

Thankfully as the old pharmacy building is mostly cool - sometimes downright cold - and dry , I didn't find any evidence of significant deterioration ...

I have an old Dell E6320 that I bought second hand for using with Linux.

I hadn't used it for a few months so when I booted it up a few days ago it complained that the battery was almost out of power.

Naturally I plugged it in to the wall socket, but nothing doing - the battery refused to charge

It looked like the battery might have died but it all happened so quickly I suspected that it was only playing dead - which it was - so I did some googling and found some instructions on how to fix the problem on windows machines.

Good news - it meant the problem was generic to Dell hardware and not some Linux driver weirdness.

So I did what it suggested - basically power off the laptop, take the battery out, power up the laptop without the battery present, power it down, reinsert the battery, and power the device back up again.

The device should now begin charging, as you've (hopefully) fooled the battery sensor into thinking it has a new battery. 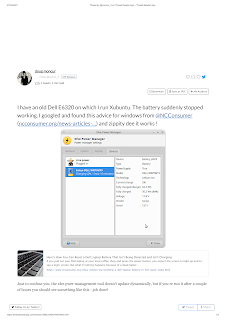 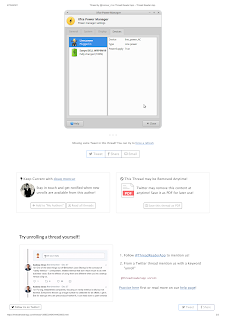 One oddity was that the Xcfe power manager turned out not to update dynamically, which was a tad confusing, but some good people in the Xubuntu community picked up on this and posted a bug fix request.
While confusing, the Dell comes with a couple of lights to show you the battery's charging, and if these are lit, you're good to go.
All in all this turned out to be a pretty good experience and the fix turned out to be astoundingly simple when you know ...
(If you are interested the thread is available at https://threadreaderapp.com/thread/1386533404544430083.html and the original help note at https://www.ncconsumer.org/news-articles-eg/resetting-a-dell-laptop-battery-in-five-quick-steps.html)
Posted by dgm at 12:01 No comments:

So, how's the dogfood going?

It so happens that a bit over two weeks ago J managed to do something to a thigh muscle while doing some yoga at home. What actually happened we don't know, but it was painful enough to make her yelp.

Normally rest is the best answer, but over the next couple of days it was pretty painful, and didn't seem to be getting better on its own, so off she went to our GP.

He didn't know either, so it was off to Albury for an ultrasound scan and physiotherapy to try to relieve the pain of the injury.

The upshot of this is that I've been spending a lot more time in medical facilities' waiting rooms and had ample time to work my way through James Clark Ross.

This has been a pretty good test of using the barebones Lenovo as an offline pdf reader as most medical facilities around where we live don't provide public wi-fi, and of course all the dogeared copies of National Geographic you normally see in doctors' waiting rooms  have been removed and incinerated as an anti-covid precaution.

In practice, off line reading on the tablet was a pleasurable experience, the 7" screen sharp and legible, and scrolling was smooth.

Battery life was pretty good as well, which meant that the device could be left in standby all day without the risk of running out of power.

So as far as offline reading of scanned books goes, this was a win.

Now I'd purposely started out with an item in pdf format and using acrobat, as the automated conversion of scanned books to epub tends to mess up tables and do horrible things to footnotes. In practice I've found the 'as is' pdf version preferable for anything with complex layout or formatting.

And the crucial difference about the books available via Gutenberg is that rather than being scanned, they've been rekeyed, meaning that epub is a viable option as I learned a decade or so ago, when I read Crawley's nineteenth century translation of the History of the Peloponnesian War on a seemingly endless Etihad flight from Sydney to London via Abu Dhabi.

So, given the success of the pdf strategy, I thought I should experiment with an epub reader as well as acrobat for offline reading.

I was a bit out of touch with epub readers on android, so after a bit of googling for reviews and recommendations I settled on Lithium as it was

(b) the free version was ad-free

(c) it was pretty highly rated across a number of reviews

I've only just downloaded it but on a first look it seems satisfyingly both functional and sparse. I've got to take J back next week for an MRI scan (the ultrasound didn't show anything of significance), and that looks like an opportunity for a decent test of its offline capabilities ... 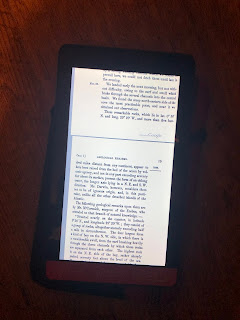 A few weeks ago I wrote that using  a cheap tablet as an e-reader to read digitised nineteenth century texts made a lot of sense financially compared with buying old second hand copies, or print on demand versions.

Now I've always been a believer in eating one's own dogfood - if you say something like this you should damn well go and try it out.

So that's what I did.

I searched ebay for the cheapest most basic brand name tablet  I could find. My only requirement was that it should run a recent version of Android.

What I found was a refurbished Lenovo Tab e7 for $75 (including shipping) running Android Go 8.1.

For comparison you can find the latest Lenovo budget tablet for around a hundred bucks from the usual suspects, but of course you'd have to go and collect it, which is a consideration if you live in a rural area - there's no popping down to Officeworks or Bing Lee, it's an 80km round trip.

So, assuming $10 for delivery, my Tab e7 cost me around $65. For comparison, here in Australia, Amazon will currently sell you a basic kindle with a backlit screen for $139.

For my $75 I got a fairly basic tablet with 16GB storage. Performance is not lightning but adequate, and the touchscreen is sharp and reasonably responsive.

It's never going to let you run a scad of apps, but if you're using it as an ereader, basically you need the google books app and a pdf reader. You could also add an epub reader, but for offline reading digitised books from google books, acrobat is probably the best solution.

So how was it in practice?

Well I went to get a flu shot this afternoon, so I took it along with me to Terry White's chemists in Albury. Emphatically no public wifi.

After my flu shot they asked me to wait for fifteen minutes in case I turned green and started foaming at the mouth. (I didn't.)

Rather than watch the guys building extra vaccination cubicles in advance of the Covid vaccine rollout, I pulled out my tab e7 and started on James Clark Ross.

It was pretty pleasant in use - as nice as using a recent model kindle, with no embarassing pauses when you scrolled forward or back through the text.

Battery life seems good enough to get you through the day.

The unit itself is not particularly heavy in the hand it's listed as weighing 271 grams and being about 10mm thick which makes it a tad bulkier than a kindle, but not ridiculously so.

I'm sure you can get a case for it if you look, but I havn't - the protective sleeve that I bought for my old Cool-er ereader fits just fine (The Cool-er of course recently went to the ewaste people for recycling).

As with all these things one needs to live with them for a while to be sure, but I think this might be one of my better ideas ...