'Twas on the Monday morning the gasman came to call ...

The English humourists Flanders and Swann used to perform a song known as The Gas Man cometh, the first line of which was 'twas on the Monday morning the gasman came to call, which details a tale of woe as how a quite simple problem escalates, and involves many more tradesmen than first thought.

Over the past week I've been mentally composing an alternative version 'twas on the Tuesday morning the nbn man came to call'.

When we came back from Malaysia at the start of June I had a nice message from the NBN telling me that we could now go live with high speed internet, and rather than a Fibre to the Node (FTTN) based service we had a Fiber to the Curb (FTTC) based service, which means that basically we have a short range VDSL run into a local Fibre access point and the rest is all fibre.

So we decided to convert. At the same time we decided to change our internet providers - not because it would be any cheaper, but over the last couple of years we've come to valued  internet based tv, and wanted to add a few paid channels to our service, basically the BBC Australia ones and a couple of others.

The only real loss was that Telstra gave use 200GB of Onedrive storage which I've been using for the documentation project I'm working on for the National Trust.

One option I looked at was staying with Telstra and simply buying a Fetch box, which would allow use to keep our Onedrive storage, but over the life of another two year contract it was cheaper to go elsewhere and buy 1TB of storage from Microsoft for around $100 a year.

Apparently we needed an NBN technician to make the change, so I booked the appointment.

The day came, and the NBN guy turned up with a VDSL connection box, but our new isp hadn't shipped us the new gateway (or the internet tv box).

So I talked to the guy.

He plugged in the VDSL box, did some tests, and unplugged it. He did try our existing Telstra gateway, but it wasn't designed to work in tandem with our new VDSL service, so that was the end of that. He did tell me however, just to plug it back in when the new kit arrived and it should all be fine.

So I chased our new provider, and to their eternal credit they sent the new equipment to me express, which meant we had the kit a couple of days later.

There remained the slight problem of our solar power system. Its monitoring system has the old (Telstra) address hard coded into its configuration file. The solar power company's website didn't tell you how to get access to edit the configuration table, so I called them.

They came back with a stunningly simple solution - change the new gateway's address and wifi password to match the old gateway, and wait for about ten minutes while the system reconnects.

Brilliantly simple, and what's more it meant not having to reconfigure the myriad computers, tablets and printers we have. The only problem we one of aesthetics - I'd never changed the network SSID from the Telstra default of Telstraxxxx where the xxxx is a random hex string - leaving us condemned to go through the next two years or so with a Telstra style SSID.

I also plugged in our phone service to the new service and it rang out, so everything seemed fine, or it did until I called Telstra to say we'd jumped ship.

They didn't know we were porting our landline number, and while they were quite happy to turn off our old service, we would lose our landline number, which as we're in the middle of organising a bathroom renovation and are dealing with a number of plumbers, electricians, carpenters, tilers, etc didn't seem like a brilliant idea.

So, we're still paying for our ADSL service, and I'm chasing our new ISP about the number port.

Otherwise, touch wood, it seems fine, though strangely not that much faster than our previous fast ADSL service ...

I of course spoke too soon. Our number had been ported, Telstra had lost the port request, and what's more managed to lose any record of my conversation requesting to cancel our ADSL service, so when they fixed the port request problem, they created a new adsl service with a two year contract specially for us.

Fixing that was fun - I logged into our account and clicked 'contact' for a chat session to a customer service representative. Instead I got an 'intelligent' chatbot called Codi that provided a range of completely irrelevant suggestions. However, the magic phrase 'get a human' at least got me someone who understood the problem. Four identity confirmations later it turned out Telstra had lost all record of yesterday's conversation, so when they acted on the port request they automatically  created a new service.

However, they were quite happy to believe they had stuffed up, and more importantly waived the exit charge for the service we hadn't asked for. Then of course I had to talk to the customer retention people who asked if we had any family members who wanted to take over the service, plus a couple of other silly questions, but again they did get that we had jumped ship.

All in all, about 40 minutes. The key is to always get a reference number  for any call and quote it back to them - if I'd had a reference number we could have sped matters along as they would have had a record of the previous disconnection request ...

Well Telstra still seems to be suffering under the delusion that we want their broadband service, sending enthusiastic emails about it being on its way, etc.

Rather than talk to customer service again I've filed a complaint. Maybe that will cause them to go away.

On the other hand it is worth it. Yesterday was one of the days I give my time to the documentation project I've volunteered for and one of my tasks at the end of the day is to upload the day's cataloguing data to OneDrive for backup. Normally it's around 250MB and used to take about 45 minutes. Yesterday it took less than 10 ...

Well, filing a complaint seems to have done the job.

Last night I had an email from Telstra saying things would be fixed up as agreed and this morning I had a bill for last month's phone and internet usage that seemed to be more or less correct, showing the credits that I'd expect.

Unfortunately Telstra's 'My Accounts' page still shows us as having a broadband account, but hopefully that's just an artifact of the deprovisioning process ...

A long time ago, I blogged about the problematical find of Kilwa coins in Arnhem land in the 1940s.

Well, now we have news of a possible find of another coin, this time in situ on one of the islands off Arnhem land, and as far as we can tell, roughly in the same location as the find in the 1940s.

If it does turn out to be a coin, it helps show that the coins really did get there, but of course still doesn't answer the question of how they got there ...
Posted by dgm at 14:22 No comments:

One of the problems working on the documentation project is that the old pharmacy is bloody cold, especially on a winter day when the temperature stays resolutely in single figures. 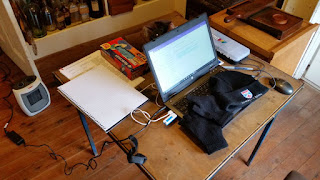 Normally my work kit consists of the following:


to which for winter I normally add a woolly hat. Definitely unflattering but I'd rather look like a gnome than be cold.

But that leaves a problem. My hands get bloody cold typing, and while I have a little fan heater under my desk, all it really does is turn bloody freezing into just plain cold on days when the temperature hovers around 5C all day.

And then I remembered what I used to do when I worked at Llysdinam field centre in the middle of Wales all these years ago. It was equally cold over winter, in fact once so cold that the locks on my car froze on the way from home to work (it was only two or three km up a steep twisty hill so the car never quite warmed through).

I use to wear fingerless gloves to type.

So, onto ebay, and I bought a cheap noname pair of fingerless wool gloves. And they really do make all the difference, even if they do make me look like an escapee from a Dickens novel ...
Posted by dgm at 14:16 No comments: