What I'm using this year

Before I retired, I used to do a blog post at roughly 12 month intervals saying what technology worked for me and what didn’t and commenting on the changes.
Since I retired, I’m no longer in the loop technically, or using super clever stuff. But I’m still using technology, both for my own amateur research, and of course in the case of documentation project I’ve signed myself up for.

As the main output is a set of CSV format files containing item descriptions as structured text, I could use anything that can generate CSV files, but as the corporate standard is Windows/Office I use excel.
Besides that I also use OneNote for all the supporting material I’ve accumulated about former pharmaceutical and patent medicine manufacturers that might eventually be used as supporting material in an online catalogue.

I’ve also a lot (10GB and counting) of reference photographs, and they’re stored as separate files in OneDrive. While they could be stored as binary objects in the excel spreadsheets, the import workflow to the final archive solution does not require this, so storing them in a self documenting directory structure makes sense.

So, nothing remarkable, but Microsoft end to end.

Now I’ve always had a love hate relationship with Microsoft. In the nineteen nineties, it was my opinion that Microsoft abused their monopoly position by adopting licensing models that were very expensive for institutions such as universities that ran large networks with large numbers of servers and clients. I spent a large part of my time trying to put together a set of solutions that used non Microsoft servers and where possible used non Microsoft applications to reduce the overall licence cost.

This led me to an interest in both thin client systems, and the use of desktop linux, in part to extend the life of older hardware.

Well, I didn’t win that one, and I have to admit that at the end of the day one of the reasons Microsoft took over the corporate landscape was because they had better products, and could afford to invest in them.

I was never an apple person until the mid 2000’s, when I changed from using Windows machines to using Apple hardware and open source products, as well as some desktop linux - some of the open source OCR stuff just works better under linux, and the editors are nicer, but for day to day work it was Apple, admittedly with Open and then Libre Office as my principal office tool.

But my view of Apple has changed over the years. While they still make beautiful hardware, it is eyewateringly expensive, and they seem to be becoming more and more intent on creating a walled garden and closing out non Apple approved products.

So, I’m moving away from Apple.

I may be writing this on a 10 year old iMac, and I might still use my old MacBook Air as a travel computer and a machine to work on in libraries, but if either of them were to break, they’d be replaced by a Windows machine - perhaps not quite so sexy or well made, but considerably more cost effective.

So for my own local history stuff I’m also working in a windows environment using a second hand Thinkpad, One Note and One Drive.

However for a lot of the basic research of digitised newspapers using the National Library of Australia’s Trove and the Welsh Papers online site is still being done on my old iMac, purely because the screen size is more convenient to work on than a laptop screen. 21” will always beat 14” for this.

I still have an old linux netbook, but I must admit it’s little used these days. Of my old linux machines, I do tend to use is my old Eee PC as a basic writing device - very simple - just using Kate or Gedit to create text for import and final edit elsewhere. Again, I’m still a fan of Focuswriter for simple writing when one wants to get stuff down with the minimum of formatting. For blogging I usually use either Open Writer or Windows Live writer.

Markdown however no longer features as a text formatting tool - simply because I no longer need to take structured notes in meetings, so being able to rapidly create a nicely formatted set of dot points is no longer a major requirement.

Again, I no longer make much use of tablets - probably because I no longer go to meetings and no longer need a simple means to access a set of papers. I still use my old Alcatel tablet with a bluetooth keyboard to take notes if I have an afternoon in a Library working on my local history stuff while J is at an art workshop in town.

However, what I don’t do is use a tablet for general surfing - instead I tend to use a Chromebook, simply because I like to have a keyboard for writing emails and the like.

Notes management is either One Note or Evernote - for legacy reasons Evernote is used for things like household invoices and bills because I’ve used it for years and our whole financial history is in it and One Note is used for more creative stuff and individual projects.

If there’s a theme here it’s that I’m not tied to one platform or operating system, but that I’ve selected a set of tools that let me do what I need to do, and what I enjoy doing.

The hardware is pretty irrelevant - most of the tools with the exception of notes management and blogging tools are available on all three major platforms, and as I’m no longer a mainstream linux user, their non availability for linux is no longer the annoyance it once was ...
Posted by dgm at 17:44 No comments:

Working on the documentation project, I'm essentially hot desking. I bring my stuff, do my thing, and then go away again, and this means being organised.

Initially I  just used an old pencil case with pens, pencils, usb sticks, and so on rattling around inside it, but when I was out helping J buy some materials from an art store I saw these really natty two level boxes which have pretty robust hinges: 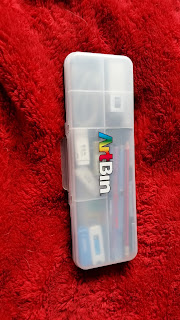 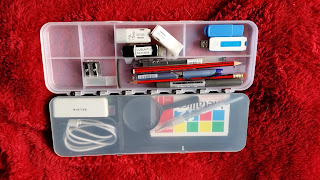 with space for usb sticks, space reserved for SD cards in the future, a usb hub, spare usb cable, pens, pencils, ruler, scalpel and spare blades, magnifying glass, and a pack of wax crayons - sometimes the easiest way to read an faint embossing on a bottle is to take a take rubbing - and hiding beneath the hub is a size reference card and a little multi tool

All in all I'm pretty happy with the setup. Ideally it could be a little bigger and have space for a 250mm ruler, and you really need to train yourself to open it with the box the right way round to avoid spilling the contents.

being not much longer than an A4 pad the box fits comfortably in any work bag.