Back in July, I blogged about how a simple wheeled box had simplified the whole basis of doing documentation down at Dow's.

And it most definitely did.

The only problem is that I've been through two of them since then. Despite being rated for a 35kg payload the first one cracked at one corner after a few weeks of use.

I put this down to bad luck and bought a second one.

Last Wednesday, the bottom (literally!) fell out of that one as I was lifting it out of the back of my car when I was down at Dow's. Fortunately everything, including my laptop simply slid into the boot, but the box was a write off - I ended up dumping it in a recycling bin in the carpark.

Now this is a problem. My experience with the boxes was that this was definitely the way to go, but obviously the boxes themselves weren't up to it.

I could have tried a wheeled toolbox from a hardware store - and certainly they are more substantially made, but they won't hold a laptop.

However I found that Bagworld had a special deal on wheeled computer backpacks so I jumped for that, despite having had bad experiences in the past with airline baggage handlers destroying soft wheeled bags 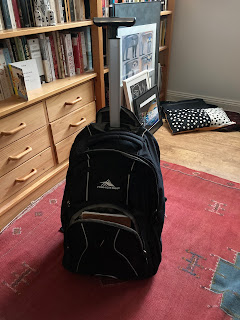 There's enough space (just) for my camera, laptop, ipad, and notebooks, not to mention a box of rubber gloves and my toolkit.