A good part of my work documenting the contents of Dow's Pharmacy involves chasing down and documenting old pharmaceutical companies and products.

Some are easy, some are difficult and some doubly so because either the name has been reused by a later, better known product - sometimes overseas - and sometimes because the name resembles a well known name and search engines increasingly have an auto-correct like capability.

I'll give you an example.

Over the weekend I did some family history work and needed to research a farm in Angus, Scotland called Burnmouth of Kintyrie.

Traditionally east coast Scottish farm names in the form X of Y mean either a house or smaller property associated with either a larger fermtoun or even a small community.

So to keep things simple I searched for the fermtoun name alone as they tend to persist while houses and smaller subdivisions can disappear, especially in the last fifty years or so as farms increasingly became larger, more mechanised and reabsorbed subdivisions.

So what did I find?

Well, everyone uses Google don't they? 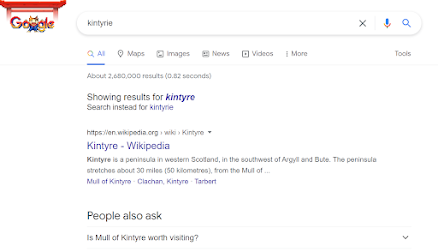 Helpfully, by default, it assumes that I meant the more popular Kintyre, on the other side of the country, and not what I was looking for.
Microsoft Bing is not much better: 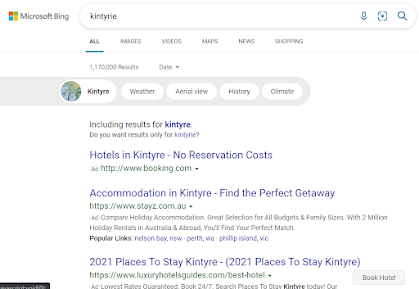 and bizarrely, the best is Yandex:

which is not the answer I would first have thought of.
Now, there's a problem here. I'm aware of the problems of search engines and know of various tricks to to sharpen a query, but a lot of people don't, and there's quite a bit of evidence that most people only look at the first page of results.
Search engines are basically advertising supported, which of course means that it is in their interests to be 'helpful' and provide answers that not only provide them with revenue but actually answer more common queries and take account of common typos etc.
Not what you really need when trying to research a particular item, location or whatever.
The problem is easy enough to work round, but I've the impression, and only the impression, that it's become more of a problem in the last eighteen months or so ...