In our collection at Dow's we have glass bottle embossed Wm. Docker Sun Brand 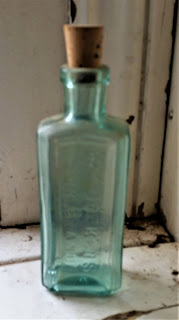 which looks like a late nineteenth century or early twentieth century medicine bottle. I'm not alone in this, the WA Museum has a similar item in its collection - but unfortunately, no image:

which is fine, except for the fact that William Docker was known as a varnish and lacquer manufacturer, which begs the question as to why a bottle from a varnish maker was in a pharmacy.
When I documented it back in 2018, my best guess, and it was only a guess, was that the bottle had originally contained linseed oil, which is not only used in varnish manufacture, but was sometimes used as dietary supplement and also in in animal husbandry - in fact you can still buy linseed oil capsules today.
But I now have another idea. The bottle originally held dye for straw hats.
And for that hypothesis I have to thank ebay.
As I've written elsewhere, ebay can be a useful research resource, as collectors and bottle hunters often advertise old bottles and ceramic pots for sale, although often unprovenanced.
Well I was idly surfing ebay and I came across these two items, which were described as straw hat dye bottles: 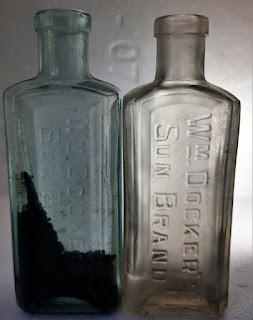 and they clearly the same as the Dow's bottle.
Hat dye for straw hats makes sense as it allowed one to add a little colour to one's outfit.
So did William Docker make hat dye?
Well google was completely unhelpful, wanting to sell me a straw hat, including those by a certain well known manufacturer of men's apparel, but Trove came up trumps, including this advert from the early 1920's 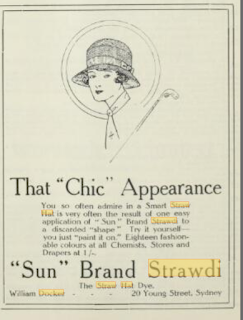 So, while on one level it's all hand waving - after all there's no label or evidence to connect 'our' bottle directly to hat dye - circumstantially it fits, and a country pharmacy might well be where one might go to buy hat dye ...

And having consulted with J, who is a practing artist, I find that straw hat varnish is still a thing and used in etchings and print making - which fits rather neatly with William Docker being a varnish maker...

And with a bit more research, this from http://www.theprintmakersgallery.ie/glossary/:

and it can be bought from various art suppliers eg https://www.jacksonsart.com/en-au/jackson-s-straw-hat-varnish-black-500ml