So when did toothpaste start to be sold in tubes?

Artists oil paints had been sold in France in lead tubes since the 1850's - prior to then artists usually made up their own colours.

One of the colours sold in lead tubes was a rich brown - Mummy Brown - which was made up of ground up dead Egyptians. In fact in the 1870's the pre Raphelite artist Edward Burne-Jones was so shocked when he discovered the origin of Mummy Brown, he buried his tube of the paint in the garden and foreswore ever using the paint again.

However the idea of putting toothpaste in tubes took a little longer.

In 1870, toothpaste was still sold in ceramic pots

but by 1897 it was commonly available in tubes

so when was it first put in tubes?
Well, wikipedia gives most of the story. There's some dispute about exactly when it started being put in tubes but it seems to have been around 1890.
Either Johnson and Johnson or Sheffield Pharmaceutical were the first to market toothpaste in tubes sometime in the late 1880's.
Both companies had previously marketed something very much like toothpaste in jars earlier on, and at some point both companies started putting toothpaste in metal tubes - initially first made of lead.
The idea seems to have been popular and as we see it was being sold in Britain (and by extension the British Empire) by Beechams by 1892 - the earliest mention I can find in Welsh Newspapers online is from the Carnarvon and Denbighshire Herald from July 1892. In Australia, the earliest advert I can find is from the Sydney Mail in October 1893. 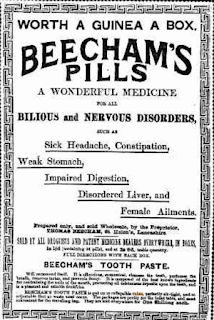 (There's a little twist to the story of Burne-Jones and Mummy Brown. The story is recorded by Burne-Jones' nephew, one Rudyard Kipling.
Burne-Jones apparently found out the origin of Mummy Brown in the course of a discussion with some of his artist friends over Sunday lunch. One of his colleagues was of course George Wardle, who besides being William Morris's workshop manager,  did several engravings for Burne-Jones.
George Wardle's wife was Madeleine Smith, though she called herself Lena by then. We don't know who was present at the ceremonial interring of the tube of Mummy Brown, though it's intriguing to think Madeleine Smith could have been there ...)