Having conducted a little experiment yesterday to assess the suitability of Notable to handle work in progress notes, I thought I'd better post a little more of a rationale.

Notable is a fairly simple application. Notes are stored in a notes subdirectory of whatever data directory you select. Each note is stored as a Markdown document in flat structure. 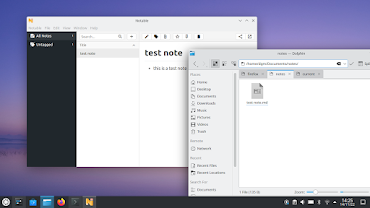 On my Linux machine the notes directory is in ~/Documents, on my windows machines I save it to OneDrive to ensure that I have a backup.
Notable will let you attach other files to notes - it's totally agnostic as to what you attach. When I do family history work usually the notes concern someone I'm working on and the attachments are typically jpeg files of old birth, marriage, death or census registers, and perhaps a pdf or two. These end up in the attachments directory which is created in the same directory that your notes directory is located in.
As the files are basically simple markdown files it's possible to use a service such as emailitin or sendtodropbox to email a copy of the note to a filesystem.
My Linux machine is not connected to any service such as OneDrive or Google Drive so that I can use it off line if necessary - typically I use emailitin to send a copy of  a note to OneDrive where I might do some more work on it.
As it's simply a markdown file, you can easily email a note to a colleague or indeed import it into word either by using a third party plugin such as Writeage or a conversion tool such as Pandoc. Cloudconvert will also let you convert Markdown to word.
Markdown
The reasons why I like markdown for taking notes are fourfold
Because of it's simplicity Markdown is really easy to learn but you don't need to learn every nook and cranny of the syntax. There's plenty of cheatsheets out there but you only really need two tags to create workable notes
# this is a heading
## this is a subheading
### this is a minor heading
Markdown allows three levels of nesting of headings - which is probably more than is required for any simple note. Notable uses the heading at the start of a file to make the note title 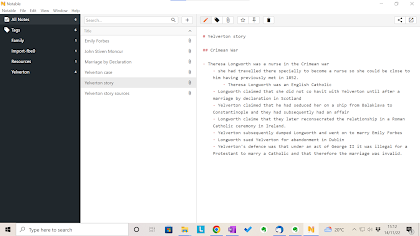 so basically the only other tags you need are
- this is a dot point
- this is a nested dot point
dot points are nested by prefixing them with blocks of four spaces. I've only had to nest to three levels, if you need more levels of nesting you possibly need to think about breaking your note up into separate notes.
The only other useful thing to know about Notable is that at the head of the markdown document it embeds information about any attached resources as a comment 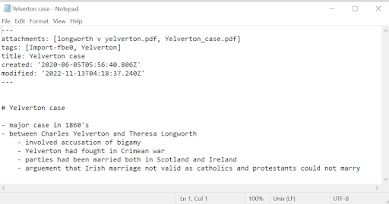 which can be useful if you have multiple similarly named attachments. Personally, I always try and give attachments meaningful names - machine generated filenames like ScotlandsPeople_OPR282_000_0300Z.jpg and jol-files-2018-05-centaur2.jpg are pretty opaque, especially when you return to them after a few days away ...