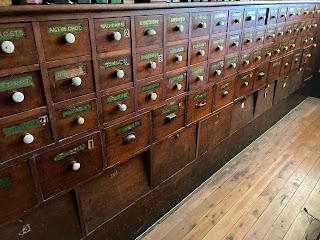 At Dow's we have an old fashioned built in cabinet behind the counter. The drawers are mostly labelled. Some of the drawers contain things - I've done a quick eyeball check and while mostly each drawer contains several of the same - eg ointment tins, aspirin packets - the drawer labels bear no relation to the contents. And of course some of the drawers are empty.
So obviously we need a standard procedure for documenting them. Up to now in the documentation methodology, we've mostly had to deal with individual items, but where the item has been a container of some sort I've usually used contains <individual item description> in the comments field, the idea of prefacing the individual item description with contains is that this would make it easier to programmatically break it down to a set of standard item descriptions at some point in the future if required.
This is quite extensible - if there are multiple and different items in the container, one simply has multiple contains statements.
This procedure was made up on the fly to solve a problem of cardboard boxes full of empty medicine bottles but it's worked quite well for a range of multi object contents description including a display of 1950's lipsticks.
So, given it works as a solution it seems sensible to use it to document the drawers - but rather than continuing as an ad hoc tweak to the methodology I've decided to document it more formally so that we (a) have a record of the procedure and (b) something to work to, because, as we know, in documentation - especially where it may end up being processed programmatically - consistency is king
So this is what we have:

Simple, but hopefully robust.
[Update]
First couple of drawers in I hit a problem as to what to do when an item contains another item - such as a tube of ointment in a cardboard box 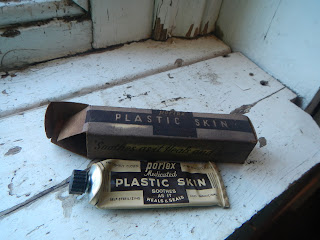 My slightly inelegant workaround is to use the string item_contains to describe the contents of an artefact. ( I originally was going to use the phrase box_contains but item_contains is more general and does not assume a particular container type. I also did not at first use an underscore in the string, but using one instead of a space makes life easier for a program to parse the description while maintaining readability for humans). So our procedure now looks like 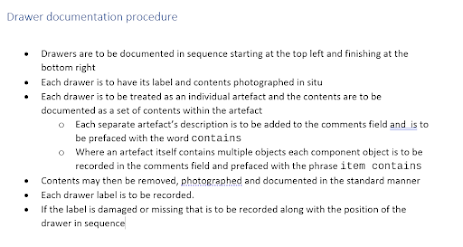