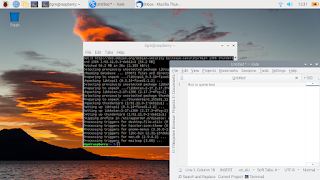 Well, in the end, I couldn’t resist trying the Raspberry Pi desktop.

There’s not a lot of information on the Raspberry Pi website about installation, so I went for it and downloaded the ISO image and used Rufus to build me a bootable installer on a USB stick.

Originally, it was my main machine, but as with all things it became too old, too slow. I moved it over to Xubuntu, used it a bit for a couple of projects and then stopped using it.

Despite the machine being 12 years old, installation just worked.

Booting off the USB, you first of all get presented by a slightly bizarre menu which gives you options about persistence etc, which I didn’t understand, so I picked the graphical install option, which put me into a very standard Debian 11 installer.

I didn't try anything clever and just followed the bouncing ball as far as install questions went - the whole disk for the operating system, etc.

The only oddity was when it asked me if I had the proprietary Broadcom drivers on removable media - I of course didn’t, but answering no didn’t cause a problem - it silently used the open source alternative drivers anyway. (This is only be a problem on some machines with Broadcom adapters - on machines with adapters from other manufacturers the installation program makes use of the default public domain driver for the adapter)

Installation is a two stage process and on first boot it takes you through a set of configuration options as to location, keyboard layout and so on, plus network setup and creating a default user. (Incidentally the system by default logs you in as the default user)

After configuration it was a case of rebooting into the standard environment.

The standard environment was pretty minimal, the browser was chromium, which is a plus and the default email client was claws which has never been my favourite.

However, Thunderbird installs fine, as does my favourite editor, kate. Just for fun I installed ristretto and abiword (not that there’s any need to - Libre Office is preinstalled) to prove that most things worked - which of course they would, it’s debian after all.

So, after ten or so minutes playing with it, what do I think?

It’s good, it’s got definite potential. Whether or not I keep it installed and use it, only time will tell. But it’s certainly one of the better lightweight distros I’ve come across …

I decided yesterday that I had too many old laptops - my old Dell Inspiron, J's old HP Beats audio laptop, and of course the old laptop that I bought at the start of lockdown in 2020. As it is that still leaves me with more machines than rationally anyone really needs ...

No one needs that many machines, so I wiped them prior to going to the recycler - and they now have the Raspberry Pi desktop on them as a sort of subversive present. I've taken advantage of the two stage install process to leave them ready to boot into the configuration menu, so that if anyone wants to play with them they have to configure both their own default user and wifi settings.