Retro computing with a purpose

When I'm documenting the contents of Dow's Pharmacy I sometimes need to make little work in progress notes, and sometimes notes to myself to check something out.

And to do this it's basically either a post-it in my day to day workbook, or else a note on my little 7" ipad mini and keyboard combo.

But I have a problem - I'm invariably wearing my blue examination gloves when doing so, and let's just say that has some problems

so basically to make a note of more than two or three words I have to deglove, which slows everything down.
And then I had an idea, inspired by my recent post about still using paper diaries. I still have both my old palm pilots, and they of course use a stylus with a 'hunt and peck' keyboard to enter text.
So first of all I dug out my original old black pilot, stuck a couple of AAA batteries in it, and it woke up just like that 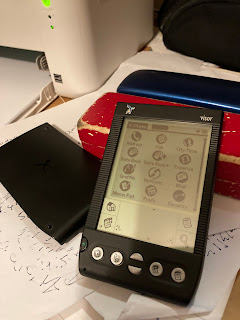 Half the problem solved - I had a working device.
I reckoned that most of the work in progress notes wouldn't need to be saved, but there would be some that did.
There is no real viable working solution for Windows, but there is for Linux, jPilot, which I first played with back in 2017.
It's recently been updated, but it's still a little bit fragile, and needs to be run as sudo, but it does work 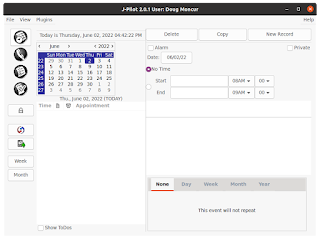 so I've now got a viable solution to get data off the device if required.
Of course, none of this means that this is a sensible or workable solution, but a bit of testing in the field should prove that either way ...
Posted by dgm at 17:02