And did it work

Well today I tried using the revived Palm Pilot for real work, and I've got to say that it worked for me, especially given that it was barely 5C and I was wearing fingerless gloves to type on my regular computer all day, as well as the usual blue gloves when handling artifacts: 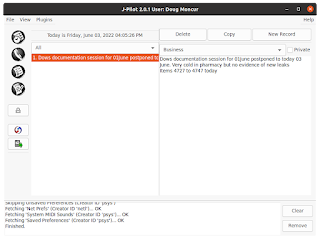 And of course the whole glove/conductive screen problem is one of the reasons I use a little Nikon point and shoot to take documentation pictures, even though the camera in most recent mobile phones is more than adequate for the task - I did after all use my old Samsung Galaxy until a couple of years ago, even though it was bit of a pfaff with one hand gloved and the other ungloved.
So given that it seems to be a success, how did I do it?
As I said before I used one of my original Palm Pilots - I was actually lying when I said this, I actually have 2 Handspring Visors, which are Palm Pilot clones,
The model I used was the Visor Solo (my other model is a Visor deluxe - more memory, translucent case, same black and white screen and OS version).
The key fact is that both run PalmOs 3.1 and are effectively clones of the Palm III. I bought mine back at the start of the century when they were new and shiny things. If  you want to pick one up second hand there's still a healthy trade in them on ebay with ones in good condition going for between $100 and $150.
If you do buy one, make sure it comes with its USB sync cradle - basically you plug the cradle into your computer and put the pilot or visor in the sync cradle, which gives you a setup something like this: 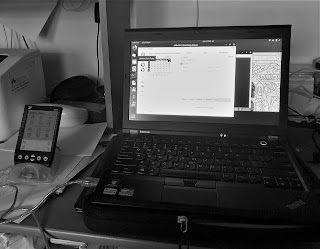 For a host, I used my old Thinkpad which runs Ubuntu 20.04 LTS these days. To install jPilot I downloaded the DOWNLOAD.sh and INSTALL.sh scripts from jpilot.org,and then ran the download script, and then used sudo to run the install script.
In the course of doing this I discovered that the libcanberra-gtk-module was missing from my Ubuntu install, but there is an easy fix using sudo apt install libcanberra-gtk-module.
Once you've got the software installed and the devices connected up you will need to create a pilot user id from the file menu in the app prior to doing your first sync or backup. After that it's a case of simply doing a sync.
As I've said before, you need to run jpilot from a privileged account - sudo jpilot from a terminal command line should do the job ...