Gopher and the birth of the web ...

Yesterday I posted the following 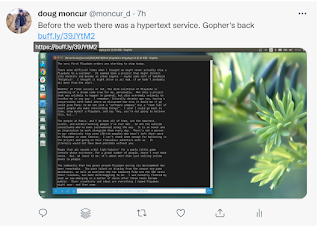 it was a story about how a press release had been posted via Gopher rather than via the web.
In the early days of the internet, there was a lot of content out there, but it was badly organised. There were finding tools like WAIS and Archie, but there wasn't a lot in the way of tools to display a set of linked pages of information - aka hypertext. (If you are interested in the tools available take a look at Ed Krol's Whole Internet User Guide and Catalog - second hand copies can be picked up from AbeBooks for between four and five bucks plus postage).
There was no real gee whizzery to this - most content servers were standard Unix servers and access was universally via a command line terminal window, so all you needed was a way of searching for content and then perhaps following links to related pages - basically like a very simple text based wiki.
In the late eighties there were various attempts to develop products to display useful information - for example at York we had our own simple in house product to allow central compute system users to search user guides etc, which ran (if I remember correctly) on a little microVax.
Gopher was the first protocol to gain widespread acceptance, and replaced idiosyncratic local services almost overnight. And because almost all servers on the internet these days accepted connections from just about anywhere, it became a game to find the most geographically distant server - my best was the cricket scores gopher page from Wits in Jo'burg.
At the same time there was the WWW from Cern. A different protocol, also originally developed in house for document sharing.
Gopher had a more restrictive model, implicit in the design was the idea that it would provide a set of centrally managed linked documents, while the web was the world wild web - documents could be linked to from anywhere, and the simplicity of the markup involved in early HTML meant that anyone who had familiarity with the concepts of markup from anything from Wordstar to TeX could learn to put content together in an afternoon.
And in the early days of the web that is exactly what people did, putting together simple pages about their research, and linking to content, such as English lecturers putting course synopses, reading lists and essay topics on the web.
The other advantage that the web had was that both the protocol and server wer public domain, while Gopher's was licensable, meaning that anyone could have a webserver (At one point, I had one under my desk running on an old pc purely to share documentation, with the only real access control being whether or not you knew the server's address).
And so WWW won out over Gopher.
But it's important to remember it was originally just a simple text sharing protocol 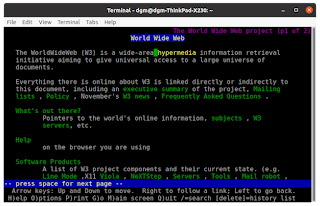 and not the blooming buzzing confusion it is today ...
Posted by dgm at 15:18