You may remember that  I was puzzled by a Joseph Terry bottle top I came across while documenting artefacts: 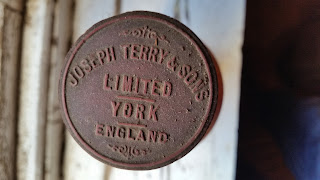 Initially I thought it was late Victorian or Edwardian, but how it came to be on a bottle of pwdewred rhubarb extract was a mystery. Terry's were chocolate makers, not rhubarb purveyors.

Wikipedia gave me a likely start date of 1895, being the year the company incorporated under the name, but the end date was a bit of a mystery, so I tweeted the picture to see if anyone had any ideas.

Well, a former colleague picked this up and forwarded the tweet to the Borthwick Institute at York.
The Borthwick didn't hold the Terry's archive, but they passed it on to the York Castle Museum, who confirmed the 1895 start date and the York Cocoa House, who added that Terry's didn't become serious chocolate makers until 1908. 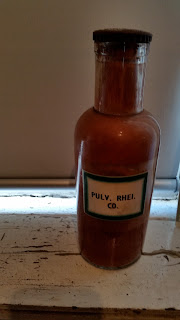 well this is the bottle.

Since I found the Terry's top I've found evidence that bottles were reused and relabelled, so I'm guessing the bottle that either the bottle originally held something else, or else the top was reused to replace a missing top on a jar.

Quite how a Terry's bottle top ended up in country Victoria, 20,000 km from its origin remains a mystery though
Posted by dgm at 16:54