The mystery of the Terry's bottle

Well, I now think I've got a plausible scenario as how a bottle of powdered rhubarb extract from Terry's of York ended up in a pharmacy in country Victoria.

Having lived off Bishopthorpe Road in York in the early nineties I'd associated Terry's with chocolate and especially the smell of chocolate orange on winter's morning in the run up to Christmas, and I was tending to assume that the bottle had been reused and had possibly held cocoa powder or something similar originally.

But overnight I had a series of incredibly useful tweets from the York Cocoa House.

I've combined the tweets into a single Google Doc to make everything more readable but the story goes like this:

The company that eventually became Terry's started out as an apothecary's business and began making herbal lozenges and a vast range of herbalist's supplies: 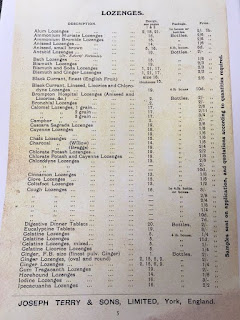 and what's more Terry's were entering trade competitions and winning prizes, including both Melbourne and Adelaide. The herbal lozenges allowed them to move into confectionery, but they only really became serious chocolate makers after 1908, meaning that before then Terry's were confectioners and herbalists.

My guess, and it is only a guess, is that RockeTompsitt, the wholesale druggist who supplied the pharmacy took on Terry's as a supplier, and either didn't repackage the Terry's products, or else carried them as a separate line, and the person doing the ordering for the pharmacy decided to try this English product that had been winning prizes, perhaps because they were not happy with the normal RockeTompsitt product ...