I've just been to a public lecture on international perspectives in the digital humanities featuring Patrik Svensson of Umea and Ray Siemens of the University of Victoria.

Now they covered a lot of ground and said various interesting things but the thing that most grabed my attention was Ray Siemens contrasting the discipline centric prevalent in anglophone Canadian universities (and in Australia, the UK, and I would guess the US and NZ) and the rather more inclusive francophone notion of les sciences humaines which emphasises the study of human experience over disciplinary silos.

While not explicitly making the same link, Patrik Svensson in his description of the work of the humanities lab in Umea unconsciously emphasised the idea of building a pace where interactions happened - essentially a digital version of the Aston Arts Lab where humanists can interact with technologists and vice versa.

Which of course begs the question of what are these interactions and what is their value?

Really it comes down to three things:

The first is quite easy. It's really access to content. The major impact of computing has been content aggregation, ie as content is digitised for preservation it also becomes more available and as these sources become available it becomes possible to ask more complicated versions of traditional research questions: 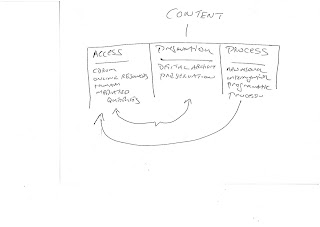 digitisation has essentially provided access to content. Initially this was quite often via networked cdrom databases allowing people to work on resources from their desks, later on it was via remote databases such as Austlit - however as there was no programmatic access essentially research was basically traditional research with a little technical mediation. At the same time digitisation and digital preservation initiative vastly increased the amount of material online, which basically meant that traditional questions could either be asked of new material or much larger sets of material. One could point to things such as Google Books providing a vast corpus, which can start to tell you interesting things.

One example is the Google Ngram viewer which basically allows you to search for the occurance of a particular word or phase across time - here for example is the ngram for the word indies: 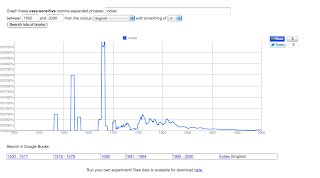 which shows, not surprisingly that peak use syncs with the age of (European) exploration.

A step change then. But not something different. It's still recognisable as the humanities and still fits into the siloed discipline centric anglophone model.

The latter two questions are not. They are big untidy, sprawling multi disciplinary questions on the impact of information on society and culture.

What happens when everyday services like banks, bookstores, supermarkets and so on move online - for example the effect of online banking in abolishing geography, like being able to pay your credit card bill online from a cafe in Galicia as easily as from my desk at home, or indeed the similar effect of online bookstores or supermarkets - for example Auchan Drive where you click and collect - and cleverly get round the 'waiting for the delivery truck' problem.

What happens to families when they are geographically fragmented but able to maintain connections by email, skype and facebook? And what happens when family members don't want to stay connected?

What is the experience of political events in the age of anonymous networking. We have already seen the impact of the twitter revolutions in North Africa.

Big questions, and ones that should be addressed. Informatique et les Sciences Politiques et Humaines. It sounds and looks like a francophone concept, but actually I think it's a liberating concept and one that encompasses technologies engagement with society.