When the NBN came to Beechworth in 2018 we ended up with an FTTC (Fibre to the Curb) connection - which is exactly what it says - a fibre connection to a fan out unit down a hole at the end of the street and a connection to the fan out unit over the old copper network.

And it's been pretty reliable. We have a 50Gbit/s link and all the usual speed tests show that we get that most of the time.

Apart from some teething troubles in the early days and network congestion at the start of the pandemic it's been reliable and done what we wanted.

But it does glitch and drop out occasionally. These smart modems with a little failover 4G connection unit inside them are not an option as we are in a small 4G blackspot - our mobiles use wifi calling in preference to a 4G connection.

So far however my only worry has been the bit of the old copper phone wiring between us and the fan out unit. I'm not sure when it was installed but our connection box outside of the house still has the pre-1995 Telecom Australia logo 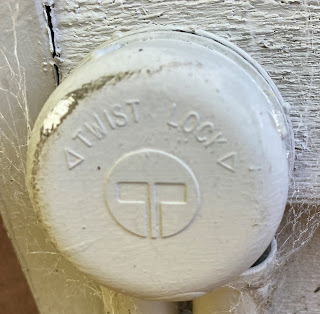 so we can probably guesstimate the wiring as being at least thirty years old.
So when I got a marketing email from NBNco saying that we may be eligible for an upgrade to FTTP I was immediately interested.
Yes it would cost a bit more a month with a faster plan, but while a 50 gig plan was really fast a few years ago, having several smart devices and a stupid number of computers, not to mention the tv, it probably makes sense to upgrade.
Now, we're with iiNet, which is part of TPG/Vodafone. And the reason we're with them is because we have a Fetch box to let us watch (or actually these days stream) some of the less common news and doco channels - this gives us around 250 channels of which in reality we probably watch four. In fact it's mostly ABC iView and SBS OnDemand with a leavening of BBC First and BBC Earth, plus the occasional Netflix movie.
As a solution it works for us and we don't have a particular reason to change.
Why am I telling you this?
Well NBN has a web page about FTTP upgrades that asks you to nominate a provider, and I guess then takes you to the providers website. So, if you were with Optus and wanted to stay with Optus, you would click on the Optus logo, and follow the bouncing ball.
But if you look at the NBN providers web page you'll notice that the TPG/Vodafone brands are notable by their absence - most the non TPG companies are there but not TPG.
So, I emailed iiNet's support desk. The first time around they gave me the wrong answer - they told me about paying to have a custom private installation. but then when I pointed out it was the NBN Fibre connect program I was referring to, they  came back with the following:
In regards with your inquiry about the email your received from NBN regarding the change technology to NBN FTTP iiGroup will be participating in the NBN Fibre Connect Program soon but for now you can register your address here http://sms.tpg.com.au/coat_register and we notify you as soon as it's ready.
In other words, they're not quite there yet.
The actual form is pretty easy, but it does require you to tell them your NBN Location id, a magic number that NBNco use to identify your physical connection.
Perversely the NBN's own check my address page no longer gives you your location id, but if you use the check my address form on Aussie Broadband's new customer page it gives you your NBN location id.
Obviously there's no point filling in the form unless you're (a) a TPG group customer, and (b) have received a mailing from NBNco about potentially being eligible for an FTTP upgrade, but if you are, it might speed things up a little for you ...