Getting the news of Trafalgar out

The battle of Trafalgar took place on the 21st of October 1805.

No one in London knew this until late on the 5th  or possibly early on the 6th of November when Lapenotiere reported to the secretary of the Admiralty Board Sir, we have gained a great victory. But we have lost Lord Nelson.

So, how soon was the news public knowledge?

Remarkably quickly, it seems. The official government gazette in London published news of the victory on the morning of sixth and  by the eighth the Cambrian newspaper in Swansea was reprinting the official announcement 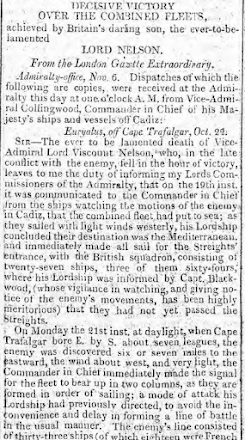 (The full text can be found on Welsh Newspapers Online)
meaning that the news had managed to reach Swansea in around two days - quite impressive when the fastest thing was a mail coach, which with autumn rains and mud could probably only average 5mph.
While newspapers were not common in 1805, we can guess that the news spread at around the same speed across Britain, meaning that most of the newspaper reading gentry, like William Holland, would have known of the victory by the middle of November.
And certainly by December 1st the minister of Airlie and Eassie parish in rural Angus not only knew of the victory but that he was also expected to hold an official service of thanksgiving on the 5th of December.

But what of Australia?
Well, at the time of Trafalgar there was only one newspaper, the quasi official Sydney Gazette, which makes it fairly simple to estimate when the news reached Sydney - on or about 27 July 1806,

or roughly nine months after the battle, considerably longer than the roughly six months it took for news of the death of George III to reach Sydney (George died at the end of January 1820, and the news did not reach Sydney until mid-July). 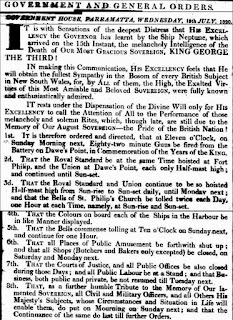 or indeed twenty years later,  the roughly three moths it took for news of Victoria's accession to reach Sydney.

Essentially it shows just how isolated Sydney was in the early days of the colony, and both Norfolk Island and Hobart even more so ...