Something that I get asked about down at Dow's is Asthma Cigarettes.

Now, as far as I am aware, we don't actually have any examples in our collection, but it's entirely possible that we've a few hiding somewhere. 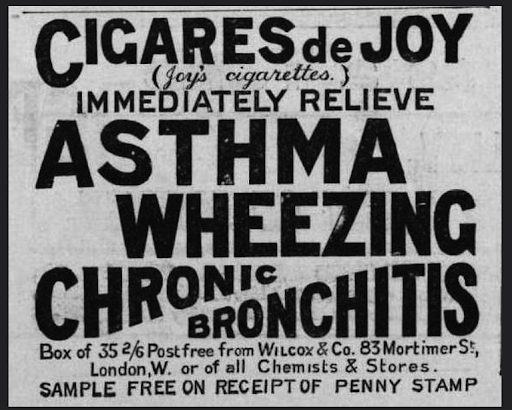 Most people, understandably find the idea of people smoking a cigarette to alleviate the symptoms of asthma downright weird, but in the late nineteenth century and early twentieth century they were most definitely a thing.

However, like a lot of nineteenth century medicine, there was a nugget of good sense in using asthma cigarettes.

If you're asthmatic, or live with one as I do, you'll be familiar with Ventolin puffers. Ventolin however, only came into use in the mid nineteen sixties.

Before then cures varied. Some doctors treated it as principally a psychosomatic disease, and others treated it with corticosteroids, which had to be injected.

However, prior to this in the nineteenth and early twentieth century herbal cigarettes became available containing herbs that helped dilate the blood vessels and relieve the symptoms of asthma.

The original discovery had been made in Madras in 1802 by a Scottish doctor working for the East India company, who discovered that the local cure of inhaling Datura ferox smoke, indeed relieved his asthma.

On his return to Britain he found he could no longer obtain Datura ferox and turned to Thornapple (Datura stramonium) which he found equally effective.

There were and are side effects from inhaling Datura smoke, but if users were careful they probably obtained real benefit from an occasional asthma cigarette. 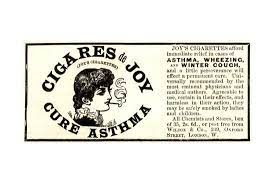 Individual manufacturers had their own mixes of herbs, but  most contained either Thornapple or Belladona as the active ingredient. Some also contained lobelia leaves, which were also believed to help relieve the symptoms of asthma.

None of them contained tobacco, but some brands contained a small amount of cannabis as a relaxant (Nineteenth century asthmatics were sometimes prescribed a tincture of cannabis to calm them down during a severe attack.)

While we can't say what was used in the mixture for each individual brand, Grimault's was a brand that did definitely contain a little cannabis. We can say this as they advertised the fact.
After the nineteen twenties, when the use of cannabis in medicine was discouraged asthma cigarettes probably only contained thornapple or belladonna.
Posted by dgm at 15:52