The dance of the dying chromebook

For the last seven and a half years or so, I've used a chromebook to read my mail in the mornings

No more - the battery has finally died - basically, it won't charge any more, and it's not worth replacing the battery, especially as the machine itself went end of life in March 2019.

All that was left to do was to powerwash it while it still had some charge left and put it with the other stuff for the e-waste centre.

So, would I buy myself another chromebook?

Yes, it was a good experience for what I used it for - basically web based things like mail, calendar, online news sites, and unlike a tablet, it had a decent keyboard meaning you could do a draft using Google docs, or put together a spreadsheet.

I even used the Google Slides on a number of occasions to put together presos.

So all good. You can most definitely use them to do serious things if you're so minded.

So you're off to JB HiFi this afternoon are you?

No. As you might recall I bought myself one of these lo spec Lenovo Celeron laptops in a stocktake sale a few months ago both to replace the chromebook and step in should my 2011 vintage MacBook Air become unusable due to the fact it's off support - not to mention I'm a windows user again these days, so I've no pressing need to buy myself another Chromebook.

And I have always been a staunch believer in eating one's own dogfood, so the Lenovo it is for the moment (although I confess I used my elderly Air this morning out of habit).

I won't be off to the e-waste centre this afternoon either. 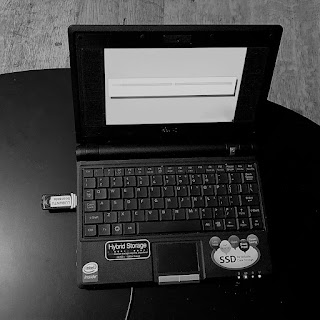 I've a couple of old 32-bit linux netbooks that I havn't touched for a year or more. I've decided that over the next week or so I'll wipe them and give them a clean install and take them to the e-waste centre along with the chromebook  ...