Yet another bloody computer ! 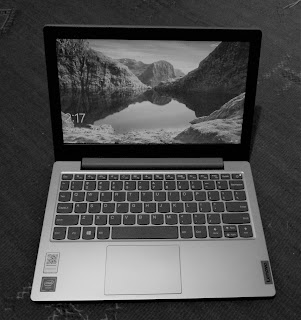 I've bought myself another computer - this time one of these minimalist Windows machines that are supposed to compete with Chromebooks in the education market - 4GB RAM, a mere 64GB eMMC storage, 11.6" screen, Celeron processor.

All a bit minimal these days, but the keyboard is nice to type on and the trackpad is pretty good, and the screen's easy on the eye.

But the obvious question is why did I buy such a low spec machine?

Well, for the past seven and a bit years I've used a Chromebook to read my email in bed (and also look at various online news sites) in the mornings, but two and a bit years ago it went end of life, meaning no more operating system updates.

Recently, it's become erratic, with occasional unexplained shutdowns, sometimes refusing to charge, and a few other signs that it is starting to die on me. It's still usable, but there's a question as to how long it will be before it goes to the e-waste centre.

At the same time my 2011 vintage MacBook Air that I used to take travelling with me (remember travel?) is no longer receiving operating system updates, and there's an obvious question as to how long Chrome and Thunderbird will continue to work on the machine.

The new minimal Windows machine gives me something that allows me to run Chrome, and by extension, applications such as Evernote via their web interface.

The other driver is that these days I'm a Windows user again - the Dow's Pharmacy Documentation project is all based around the Microsoft ecology - Excel, OneNote, Word, OneDrive, and these days, frankly, what you get for your dollar in the Windows world is a hell of a lot cheaper than you can get from Apple, and requires less fiddling than you need to use linux as a day to day desktop environment.

A couple of years ago I did buy myself a second hand Thinkpad Yoga as a carry about machine. It has worked pretty well as something to take and setup for a day or so, but at the same time it's proven a bit bulky to easily carry about,  while my new minimalist Lenovo is lightweight with decent battery life making it as easy as the MacBook Air to carry around.

I picked up the Lenovo in a stock take clearance, meaning that it cost quite a bit less than the sticker price, and markedly less than a new Chromebook built on more or less the same hardware.

So, while I have a stupid number of computers at the moment, we can say that in a few months I probably won't have the Chromebook, and possibly will have ditched the Air.

All the standard stuff works - using Word or Excel you can't really tell that you are running on low spec hardware and saving material to One Drive - sort of like the network computer model which you see in the Chromebook.

Obviously anything compute intensive would tax the hardware, but then that's not what the machine is for - it's for some simple web browsing, note taking, and email.

Used as a lightweight device, it's absolutely fine. And while it's most definitely easier to use it connected to a network, unlike a Chromebook, it also works fine as an offline device and syncing everything later - something I've done using the Yoga over the past couple of years, and which I have confidence in as a way of working.