Back in 2011, I bought myself a no name (it was packaged as a Zpad) Android 2.2 tablet from China for evaluation purposes.

At the time when I bought it, the Android tablet marketplace was a wild west sort of place, with a lot of players besides the obvious major manufacturers, and I thought we would see something happen in the tablet market place akin to the PC clone revolution of the nineteen nineties with a large number of cheap devices outcompeting the iPad.

In the event I was wrong. For a little while, it looked as if I might be right, but no, the iPad kept is dominant position in the market place. More because of the software ecology around it than anything else. When I look at my recently acquired Huawei Mediapad, or any of the more recent Samsung tablets, I still find it difficult to understand why the iPad is so dominant, it's certainly not operating system or hardware performance.

Anyway, I was clearing out some of old hardware yesterday - a couple of Sun keyboards, some old PC bits and so on and I came across my Zpad - last used about three years ago - and out of curiosity, plugged it in to charge.

It was slow to charge, but it got there 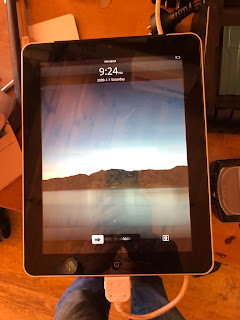 even if the clock was a little out.
I found I hadn't wiped it since last using it, so I wiped it to reveal the factory default desktop 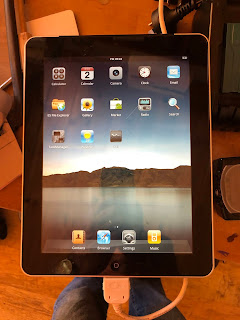 I left it unplugged overnight, to see if the battery still would hold some charge the machine still powered on the next morning.
Of course, the world has moved on, and it is so hilariously out of date as to be useless for all practical purposes, so I guess it's a trip to the e-Waste centre ...