It's no secret that I like messing around with old documents.

Normally, when working with digitised content, I use an old 2008 vintage iMac - long unsupported but still with an excellent screen - to display the item, and I'll  type the notes into a laptop.

I could, I guess, have a single machine with dual screens, but at the moment this works for me. What this solution is not, is portable, which can be a pain when working somewhere like a library (which I havn't done for six months because Covid.)

Now the little note taking ipad I bought myself a year or two ago has become useful as a carry around device - but the screen is a little too small to work with when looking at old documents.

Given that I normally work off of a laptop, I decided that a standard format tablet would probably be the thing to go for.

An iPad Air would have filled the bill, but not at the price Apple charge for a new one, and decent refurbished items have disappeared off the market.

So that meant Android.

Now if you go to any of the big box stores you have a choice of Lenovo or Samsung, and the items with decent quality displays are reasonably pricy.

So I read some reviews and overseas people seemed to rate the Huawei mediapad - decent screen, good battery life etc. There's two models and the better specc'd 64GB model isn't currently available in Australia - except that for some reason Amazon will sell you one from Amazon UK via their market place. 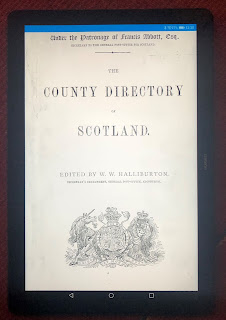 so that's what I did.
It only took a couple of weeks to get here. Gratifyingly it was not crammed full bloatware, giving you a fairly vanilla machine to work with. The only problem was of course that it came with one of these bizarre UK claw chargers: 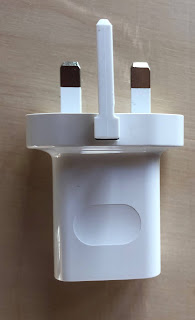 which wasn't a problem as, like most people, I've oodles of spare micro-USB chargers. I've also got an array of international sockets in my workshop dating from the days when I used to play with kit from overseas 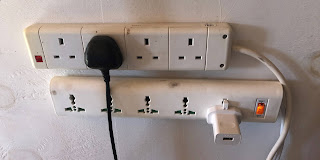 Setup is standard Android, and the tablet comes bundled with the Office 365 tools for Android. There's not a lot in the way of unnecessary bundled apps, but the device comes with  Huawei's own app store as well as Google Play. The whole setup experience is pretty vanilla.
In use the device is responsive and the bundled Microsoft swiftkey virtual keyboard is one of the nicest I've come across.  Screen quality is as good as promised, and the device is light and sits nicely in the hand.
Definitely a business class machine despite its low price.
Huawei include their own mail client and 5GB of their own cloud storage but there's no compunction to use them, or their own app store - you can just as easily use your own preferred mail client and cloud provider, and delete their apps off of the device should you prefer.
Due to Huawei being banned from 5G networks in Australia and the recent reported hacks of university computer data, there's obviously going to be some questions around security.
Personally, if like me, you are a private individual, your data is probably no more at risk with Huawei than with any other cloud provider.
If, however I still worked for a university or a government body, paranoia might kick in and I might think twice about buying such a device, but equally, you can be too paranoid - after all Telstra, no less, sold me a Huawei 4G broadband modem a couple of years ago ...
Equally, if you want to be careful, you can simply avoid installing applications like online banking on the device, or simply access them via the web.
It's a shame that the Mediapad is not better known in Australia. It's a good well made, well priced device that does what it says.