Using an Android tablet for a serious purpose

Recently, I came across a New York Times article on how to get various older computers to be useful that, while it agreed that iPads could be useful, was quite dismissive of using android tablets for real work.

(I've lost the URL, otherwise I would link to the article)(see https://www.nytimes.com/wirecutter/lists/getting-work-done-on-an-ipad/)

As always the problem is what you define as real work.

Way back in 2012 I spent around a $130 on a Shenzen special seven inch tablet packaged with a keyboard - and I used the device for around three years to take notes in meetings and so on - it was both incredibly useful, and terribly nonstandard, with a USB micro B connector for the keyboard and a separate 3mm jack for charging, but it worked, and I could get a day out of it. 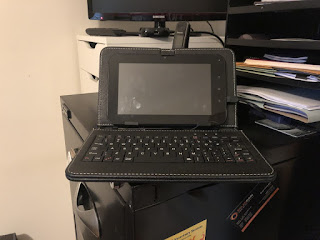 but the damned thing was so useful I went out and replaced it with another cheap tablet - this time an Alcatel Pixi 7 I got from Telstra's disposal shop on eBay for round about eighty bucks to which I added a case with an inbuilt bluetooth keyboard: 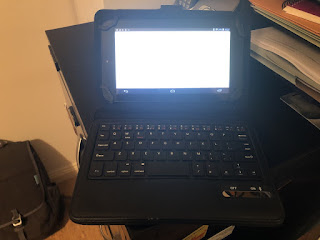 Even though nowadays I use the refurbished  iPad Mini I bought a couple of years ago as a carry round device, the Alcatel was a good machine, and you could type reasonably well on it, and save your notes to Dropbox for further processing - as with the Shenzen special I tended to use Markdown to create semi structured text that you could feed through PanDoc to provide something a little more corporate when required, but Polaris Office  also worked well with the advantage of being able to sync to OneDrive or Google drive.

And there I left it, or rather I did until my recently acquired Huawei Mediapad.

Having retired, I no longer have to go to meetings, or at least, not very often, and an A4 pad is usually good enough for notes. Occasionally, I did some research or writing work in a public library, and when I did I used to first use the Alcatel, and latterly the iPad Mini when I didn't want to cart around a full size computer - a netbook or my MacBook would have done, but there's the question of battery life - a surprising number of public libraries provide desks, but nowhere to plug in your device.

Now you might recall that the MediaPad came bundled with Microsoft's Office tools for Android. I had no intention of using as a laptop substitute, but out of curiosity I invested the princely sum of eighteen bucks (including delivery) in a no name bluetooth keyboard 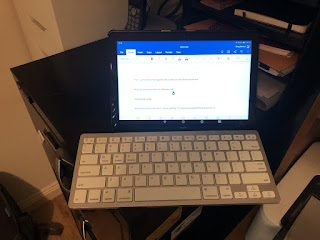 and it was surprisingly good. They keyboard was a little bouncy, but good enough to type quickly on and Microsoft's word tool for android was equally responsive, and allowed documents to be saved OneDrive using one's Office 365 credentials.

As an experience it was provocative - a tablet could be used for real work with a standard application. While I've no intention of using it as a poor man's surface the whole thing worked so well one could imagine doing so ...