Well, I've done something that I never thought I'd have to do in Australia - I've bought an air purifier. 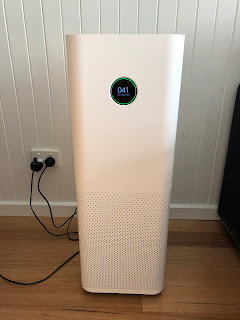 The reason for doing so is simple - we live in Beechworth on the edge of the Alpine fire zone which means that we've suffering from poor air quality for over a month.

J is asthmatic and has been suffering from the effects of the smoke, and I've been feeling a tightening in my chest on bad air days, and even the cat has been wheezing occasionally. As our house is built out of wood with an 1880's core it's intrinsically leaky and there's little one can do to stop smoke sneaking in.

So we bought an air purifier.

I bought it from a reseller on ebay on the basis of product reviews alone - they're a popular model in China and replacement filters are widely available online, we just need to remember to order once the filter starts to deteriorate, say drop below 30% capacity.

It incorporates a HEPA filter, and came with an Australian power cord. Getting it working was as simple as unboxing it and plugging it in.

There's a self explanatory little panel on its front that gives you the current PM2.5 rating per µg/m² and a coloured ring - green for good/acceptable, orange for not the best, and red for I wouldn't be here if I were you.

So far so good.

The device is described as a smart wifi enabled device, which basically allows you to use your phone to turn it on and off, as well as view device status.

This requires you to download and install the Mi Home app, and then create an account. This proved to be more problematical than I expected. I started off by using my Apple icloud.com email address and for some reason the activation 'confirm your email' messages just disappeared. Changing to my outlook.com account was rather more successful.

Once done the machine shows up on the network like this:

The device only supports a 2.4GHz connection, but it does warn you of this.

The actual app data display is fairly self explanatory 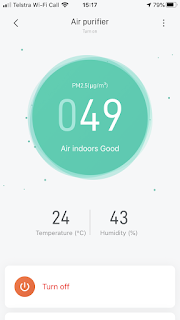 in principle you could add multiple devices to the app, including multiple air purifiers.

For the moment, the device seems to work and seems to be fairly effective at scrubbing smoke out of the air ...