Just for fun, I built another linux box this morning ...

It was wet this morning, and I was feeling fidgety, so I decided to replace the Xubuntu install on my MSI netbook.

Truth be told, I was never a 100% happy with Xubuntu on the netbook - it always seemed a little slow. If it hadn't been for the fact that development was ceasing for Crunchbang about the time I upgraded it from Windows 7 Home to Xubuntu, I'd probably have gone for Crunchbang.

I've really not used it over the last three or four years, which is a bit of a pity, as the keyboard is pretty nice to type on, so I thought I might I might try installing something a little less resource hungry than Xubuntu.

Well, I didn't feel about agonising overmuch about which distro to go for, I decided on BunsenLabs linux, which was what Crunchbang recommended moving to after development ceased.

So, first of all see if it works - I downloaded the appropriate iso and wrote it to a USB stick with Rufus, booted the netbook with it. As always with live systems booting from a USB it was a little slow to start but once running, appeared to be pretty good.

Since there wasn't anything of value on the netbook I went for the 'nuke and reinstall' option where it wiped the disk and installed BunsenLabs Linux in a fresh install.

Well, that didn't work - the installer claimed that it couldn't find the cd and bombed out - something pretty crucial to the install process.

Turns out that Rufus by default writes the disk image in iso mode, and BunsenLabs wants the image written as dd image.

Now when I did this back in the early twentyteens, I always wrote my bootable usb sticks using dd.

Lesson learned, Rufus does have an option for writing a dd style image and second time around the install worked perfectly.

As always, booting the machine for the first time involved that moment of uncertainty when, after a screen of startup messages it sits there with a blank screen, but then suddenly it leaps into life. Thereafter startup is pretty fast, and after login you're into the fairly austere default openbox desktop: 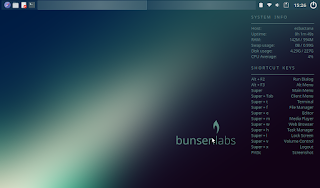 The install is fairly scant as regards applications, and strangely does not come with an email client (thunderbird works fine, you just need to install it - the Synaptic package manager is included, or else you can be old school like me using sudo apt-get install package and then using the menu editor to add it to the desktop.)

The browser is firefox, and it has a little bit of trouble with the smaller netbook screen size, but it taking it out of full screen mode solves that problem.

As I'm envisaging the machine as primarily a writing machine, the only other applications I added were focuswriter and retext for producing documentation.

And that was about it, I didn't even bother about setting up printing as I'm envisaging either emailing material to myself or using the web based uploader to put things on One Drive ...