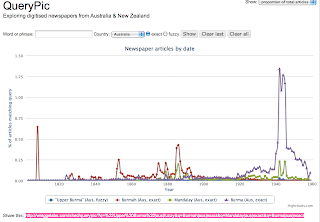 I've been having a little play with Tim Sherratt's QueryPic tool (which searches digitised versions of Australian newspapers before 1960).

Searching for 'Upper Burma' shows some activity, but not as much as you would expect given that the Third Anglo Burmese war of 1885 led to the conquest of what the British termed Upper Burma and the capture of its capital Mandalay.

You also get a nice little spike in the 1850's around the Second Anglo Burmese War.

And sure enough if you search for the older usage "Burmah" and for "Mandalay" you do get a peak around 1885. If as a correction you also search for a more modern term Burma you of course get a massive peak coincident with the second world war but also little usage of the more modern spelling prior to 1910. 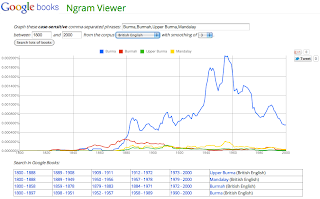 Interest only begins to develop post 1885 and already by then most people were using 'Burma' as opposed to 'Burmah', and that interest remained roughly constant until the second world war.

If you rerun it against the American English corpus you see (quite predictably) that interest in Burma prior to the second world war was mostly a British thing: 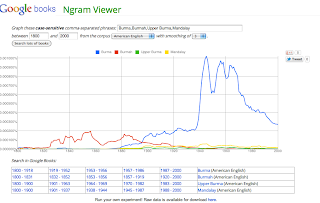 Run it against the English fiction corpus and we see something slightly different: 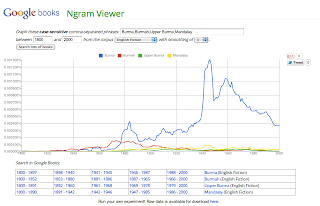 a little peak around 1885 and then not a lot of change until the 1940's (incidentally meaning that however seminal George Orwell's publication of Burmese Days in the early 1930's was to his development as a writer, it didn't cause a ripple overall). Interestingly if you ignore the 1885 peak the fiction corpus curve is sort of the same shape as the American corpus, perhaps suggesting that the first wave of (British) publication on Burma was non-fiction ....