Following on from my recent post about travel writing in the 1930’s, I took to musing on the connections between travel writers and journalists, and by a slightly roundabout way came up with what may be a story of life, love, and relationships among 1930s travel writers.

Most of these writers knew each other – as journalists and members of the upper and middle classes they bumped into each other, or knew of each other, and it would be quite interesting to document these as a social graph.

I also came across a little puzzle. I recently read Peter Fleming’s To Peking, A Forgotten Journey documenting a journey via Moscow and Manchuria to Peking in 1934, Simon Winchester in his introduction mentions how Fleming documented the journey with photographs taken on his trusty Leica III, which is not impossible given that the Leica III first appeared in 1933.

However, in the book Fleming refers to his ‘Kodak’ as his camera. Now Fleming did use a Leica, and says so in his 1937 News from Tartary.

The simplest explanation is that Peter Fleming simply made a mistake and referred to his Leica as a ‘Kodak’ simply out of habit. However, it’s also possible that Fleming was introduced to the advantages of the Leica by his travelling companion Ella Maillart in the latter part of the journey to Peking.

Whatever Ella Maillart’s relationship with Peter Fleming was, she was also close to her fellow Swiss journalist Annemarie Schwarzenbach, and indeed travelled to Afghanistan with her in 1940.

Annemarie Schwarzenbach was also celebrated as the epitome of lesbian chic in the last days of bohemian decadent Weimar Berlin before the Nazis put a stop to that and other such unGerman behaviour. Annemarie later contributed to various antifacist literary magazines and refused to deny her Jewish and leftwing friends.

Annemarie Schwarzenbach had also travelled to Spain in the early 1930’s with the photographer and photojournalist Marianne Breslauer, whose promising career came to a premature end due to her Jewishness meaning that her work was no longer published in the leading German language news magazines of the day.

Marianne Breslauer had learned her craft working as a photojournalist and was an accomplished photographer and one who would undoubtedly been aware of the advantages of the Leica over previous cameras.

So one could imagine a chain something like this: 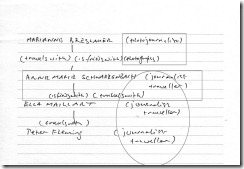 where Marianne Breslauer introduces Annemarie Schwarzenbach to the virtues of the Leica, who then introduces the Leica to Ella Maillart, and then to Peter Fleming.

[update: it turns out to be more complicated that this - Ella Mailart received her Leica from Dr Leitz of Leica. The official story is that Leitz was impressed by Maillart's photos and gave her a camera. As we know, sponsorship can be a complex thing and it may be that Annemarie Schwarzenbach, who later went on to work as a photojournalist, helped mediate the deal or not]

The other thing to remember is that the Leica was an expensive camera for its time, and would have represented a significant investment. For example, my father had hoped to buy a Leica on a trip to what was then Danzig and is now Gdansk in 1938 to document a journey to Singapore, Shanghai and Japan but found that while they were cheaper and more readily available than at home in Scotland, he still could not afford one and settled for a cheaper 120 format camera.

Due to the needs of a journalist to have something reliable that ‘just worked’ personal recommendation would doubtless have been key.

And love? Annemarie Schwarzenbach was infamous for her many lesbian affairs. Marianne Breslauer was clearly fascinated by her, and its not inconceivable to imagine that their friendship was more than platonic. Likewise with Ella Maillart, and certainly Ella’s early, very close friendship with Hermine de Sassure could be taken as suggesting a tendency to swing that way.

The real puzzle is her relationship, or not, with Peter Fleming.

Fleming later went on to marry Celia Johnson (of Brief Encounter fame) and have several children with her.