Linux, desktops and pervasive internet and offline documentation and research

A week or so ago I blogged about how I believed that desktop linux was never going to be a thing.

Well, I still stand by that argument but this morning I read an article that made the argument that as windows becomes more and more reliant on the cloud, linux was the only way to go if you needed a standalone desktop operating system.

And that got me thinking.

Over the five years I've worked on the Dow's documentation project there's been a bit of drift and increasing dependence on cloud based services, and while it's possible to revert to the original 2017 methodology when needed, it's definitely the case that it's easier to stick with the 2022 cloud based methodology if at all possible.

Let's say I was to start a new documentation and recording project, and it was based somewhere without good internet. And while it's true that the 2022 methodology can be run over a  decent 4G connection, it's certainly the case that there's plenty of places in rural and regional Australia where 4G coverage is less than stellar.

So, as a thought experiment, could you run the original 2017 methodology on Kubuntu?

The only real problem would be when one had to check against existing information held in OneNote or on OneDrive - if one really had minimal internet - it would probably be a case of accumulating notes, either on paper or a text files and then working through them, either at home, or perhaps at a local public library at the end of the day.
Applications like CherryTree or Notable, while not compatible with OneNote or Evernote mean that you could store your local notes in a structured manner making them easier to work through.
So. yes, if poor internet made using a Windows machine problematical, I reckon that one could run something very similar to the original 2017 methodology using Kubuntu (or indeed any other well provisioned Linux distribution.)
It's worth noting that when I started the project I basically made up the methodology myself in the absence of any documentation or guidance.
It's based in the main on the various conversations I've had with botanists and archaeologists over the years, not to mention my own rather dated experience in running botanical field surveys in Wales in the 1980's.
However, based on this instagram post from the Royal Botanic Gardens in Victoria, not a lot has changed 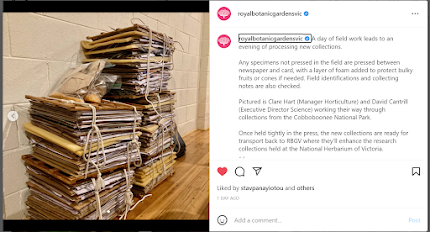 giving me confidence that the methodology could be applied to other quite different field recording projects, and probably also family history research.
As I have said elsewhere, I'm a great believer in eating one's own dogfood, and while I'm quietly confident it would be a viable solution I need to try it out for real on a little side project ...
Posted by dgm at 15:09