There's an annoying NBN commercial which pretends to be giving helpful advice about installing your wifi router, which includes the advice to put the access point in  central location close to where it will be used the most.

Nothing wrong with the advice, except that, short of rewiring, you need to put your router within a patch cable's length of the NBN box, which in turn is plugged into what was originally your master phone socket.

Fine if your master socket is in the middle of the house. Ours isn't, it's at the front of the house, because that's where the phone socket went when it was originally installed. The patch box on the outside still has a Telecom Australia logo on it, it's that old.

Now, our house is an 1890's weatherboard cottage with a modern extension on the back.

Originally there was an extension socket in the extension but that was plastered and tiled over when we remodelled the kitchen and built a sitting and TV area on the back of the extension.

This all happened before we had the NBN, and had a Telstra ADSL connection. The old Telstra ADSL router happened to produce a pretty powerful wifi signal so everything worked, even though the unit was at the 'wrong' end of the house.

We did have a bit of ethernet run down from the study at the front of the house to the sitting area, and we connected the internet TV decoder to the wired ethernet. The wireless signal was a bit attenuated so I bought one of these $10 no name wireless repeaters from ebay to allow us to surf the web while watching TV. 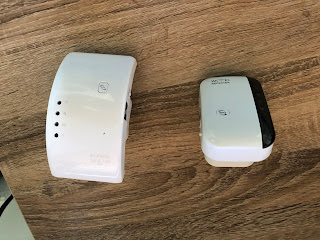 When we changed to the NBN and changed ISP's that meant a new router, but everything basically kept on working the way it had.

As a solution, this worked reasonably well.
Except for one problem. The studio.
The previous owners had converted the double garage into a teenager's retreat, even to the extent of putting in a nice timber ceiling and a TV antenna. What they didn't put in was the internet, and neither the wireless repeater or the router provided much of a signal.
We don't use it as a teenager's retreat, in fact J uses it for oil painting, and I store bikes in there.
Rather than use a sketch book, J quite often uses a drawing program on her iPad for the preliminary sketches when working things out so having a wireless connection would be useful.
It would also give me a place to bugger about with old computers and Linux if we had wifi in there.
So, how could we get wifi in there?
Well, there were a number of possible solutions that didn't involve running cables:
1) Reconfigure my old TP-link router that I installed as a backup to our flaky ADSL when we lived in Canberra - obviously we wouldn't need the 3G failover, but plugged into the ethernet connection it could act as a repeater.
2) Install a powerline ethernet connection in the study, plug the other end of the connection into the old TP-link router and locate the router in the studio
3) Use a wireless extender.
Well, scenario #1 would almost certainly have worked. When we lived in Canberra, I could get a signal in the driveway, but having previously had some trouble with the internet tv box and hubs - essentially it likes a direct connection to the router, I decided to leave this to last.
Scenario #2 might have worked. Everything I've read says that it works best if both devices are on the same circuit. The house and the studio are on separate circuits, meaning the signal would have to find it's way via the power box, and to add to the fun, we have our old overflow fridge in the studio.
Again, everything I've read suggests having fridges and microwaves on the same circuit as you powerline ethernet is a bad idea.
Nothing I read said it wouldn't work, but I didn't have a lot of confidence in this solution.
So scenario #3 looked to be the best. The simplest solution seemed to be to put a second no name wireless extender as close to the studio as possible. That worked, but the signal was pretty attenuated and not reliably usable.
So I was looking at going to scenario #1 when I found a guy on ebay selling refurbished Netgear EX2700 wireless extenders for around the same price as the no name units - under twenty bucks including shipping. The Netgear units have a good reputation, and for comparison, the current model costs around a hundred bucks, bought from the usual suppliers.
I suspect the unit had been sourced from China, as the one I received had a Chinese style flat two pin plug and a safety sticker in Chinese.
Nevertheless, when plugged into an international adapter, it powered up and configured nicely, and produced a pretty good signal downstairs in our sitting area,  out on the back deck and a reasonable one inside the studio, good enough for me to stop there.
Moral of the story - if you are in the market for a wifi extender, do your research first. The cheap no-name ones certainly do work, but if you want a serious boost, you do need one of the brand name devices, but as I found, refurbished units can be as cheap as the no name units.