Building a Xubuntu machine for research

Earlier this month I posted about building a Xubuntu based machine for fieldwork. 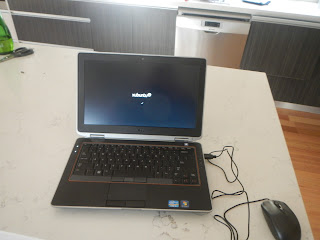 At the time it was difficult to get hold of suitable machine machine - basically all the reasonable second hand machines hand disappeared due to either working from home, or with kids having to be home schooled, the need for people to get a cheap extra second machine.
However, I manged to get hold of an old Dell E6320 ( i5, 4GB RAM, 500GB HDD) for a little under two hundred bucks, that I reckoned would be powerful enough to run R to do some (very simple) text analysis to establish the vocabulary used in Victorian murder reports, and OCRfeeder to take pdf's of Victorian murder reports and extract the text.
I decided I needed a newer machine because while capable, my old Inspiron did grind a little when asked to do anything serious.
An odd hobby to be sure, but fairly harmless.
The machine arrived yesterday. In practice a little bigger than I imagined - lesson learned, don't go on the screen size, go on the sizes from an old review - and slightly more battered than ideal, but everything worked and the screen was nice and bright.
I'd previously made myself a bootable Xubuntu USB stick for my initial experiments on my old Inspiron, so I used that.
First problem - I couldn't change the boot volume from the internal hard disk to the USB stick. Most Dell's I've installed linux on you just need to hit F12 once the Dell logo appears, and after a few seconds you end up in the boot selection menu.
Not this one. I tried holding down F12, which works on some manufacturers, I even tried an external keyboard to check if the key was faulty. I ended up resorting to Google. It turns out that on the E6320 (and some similar machines) you need to rapidly tap on the F12 key during startup until a message in yellow appears in the top right hand corner, and then you end up in the device selection menu.
After that, installation was basically the case of following the bouncing ball. The machine had come with Windows 7, and I decided to keep a small Windows 7 install just in case I ever needed to run some windows only software.
The Xubutnu installer included a nice graphical partitioning tool to let you keep your existing Windows install. The default was to split the disk half and half, which would give each more than enough, but I decided that as I only needed a small windows install to go for a 25:75 split between Windows and Xubuntu. On a 500GB hard disk this gave Windows a more than reasonable 120GB.
Everything just worked. Well except for the trackpad, which was a little slow and draggy. Strangely the little joystick thingie on the keyboard worked as well as an external mouse.
As it was a $5 mouse from the office supplies store solved the problem.
Software install was fine, network support was fine - it took me a couple of hours at most, including the F12 problem, to end up with a usable machine: 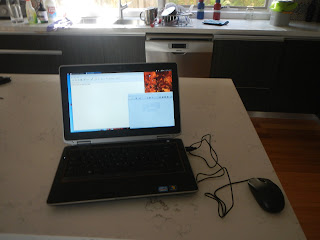