Last weekend we had an excellent weekend out of town.

We drove up to Coonabarabran, stayed in a wonderful, and ever so slightly impractical cottage built of mudbrick and corrugated iron, went bush walking, and looked at the stars. 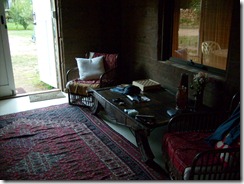 As with everything it depends what you want out of life – what this place gave us was a few days without television or internet – and space to relax, to listen to Classic FM and generally unwind.

We drove up through Cowra, Cooniwindra, a slightly tatty and run down town with some wonderful art deco shopfronts, Dubbo and Gilgandra.

Our cottage was on a property outside of Coonabarabran and is best described as a fantasy cubby house for adults – if you like rugs, woodburning stoves, and a relaxing stress free ambience. Somehow listening to the news on Classic FM of the flight disruption caused by the volcano in Europe was interesting but remote – definitely news of far away events. And later on that evening listening to a concert of early music from Utrecht while sitting by the stove seemed just right. 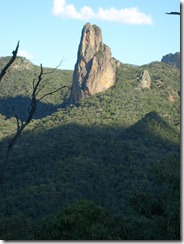 otherwise we talked, relaxed, drank wine, cooked some meat on the barbecue one night, and marvelled at the clear cold night sky, including the milky way, as visible and as clear as it would have been to the ancients (Coonabarabran styles itself the astronomy capital of Australia, in part due to its proximity to Siding Springs. Round about where we stayed it seemed like every second or third property had a little observatory dome in the paddock – almost as if every astronomy nut in the country had retired there)

As a point of principle we always try and come back a different way to the we went.  This time we went via Gulargambone, Dubbo, Parkes and Forbes.

Getting to Gulargambone was fun, through the park on a sealed road and then onto dirt. At one point we came to a deep creek gully where the bridge had been washed out.

Someone had bulldozed a temporary ramp down one side of the gully to the more ore less dry creek bed and up the other, and while the signed warned it was for four wheel drives only our trusty Subaru managed it without difficulty.

The turn off, still on dirt was obvious: 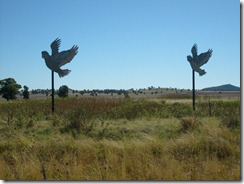 Gulargambone is the place of the Galahs and has taken to putting up iron birds as a sort of mascot and an expression of local pride. The town is held up to be a model of regeneration for the small drought damaged towns of the central west. We only knew about from an article in the Canberra Times magazine a couple of weeks before about Gulargambone and the Cafe 2828 as a symbol of regeneration.

By the time we got to the town itself, after dodging several fairly impressive looking lizards on the road we were ready for a decent coffee and hunk of cake. Cafe 2828 certainly lived up to its reputation and it was pleasantly warm – 25C as opposed to Canberra’s grudging 19 or 20 at this time of year.

The rest of the drive back was not really interesting. Peak Hill, an old gold mining town near Parkes, has some old 19th century shop fronts that would merit photographing sometime, but Parkes didn’t fascinate (admittedly the road skirts the old centre of the town) and while Forbes had a nice looking old court house, nothing else looked remarkable.

So four days, 1200 kilometres, and an escape from the world for a few days. Definitely worth doing.