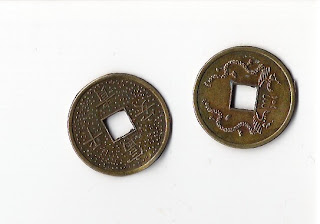 Went to Braidwood market today, where there was a stall selling old coins, mostly federation or Queen Victoria pennies, but there was a tray that had a mixture of communist era east European coins, mostly from Hungary and Poland, plus a pile of these chinese coins like the ones used in feng shui.

I bought the two pictured above, plus a Soviet 5 kopeck coin for three bucks. (Click on the images for a larger version)

Back home I tried to identify the coins from the web. Both are thin, 30mm diameter and with the dragon and pearl design on one side and differing inscriptions on the other - as can be seen from the second image below. 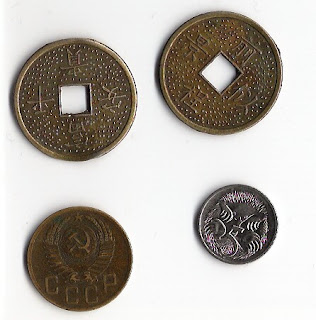 I've added a scan of the Soviet 5 Kopeck coin for fun plus a contemporary Australian 5 cent coin for comparison. Our 5 cent coin is about the size of a US dime or a little bigger than an English 5p.

Anyway, absolutely zero success identifying them, the nearest I found was a web site selling coins for use in feng shui.

So, are they genuine, or are they fakes made for religious purposes?

And if they're genuine, when and where were they made?
Posted by dgm at 17:21