Rupees, a puzzle, and ebay as a research resource


As part of my background reading for a possible trip to Myanmar I was reading Andrew Marshall's The Trouser People last night. In the book he basically retraces a Victorian administrator's steps through the Shan states, using a device not dissimilar to Emma Larkin's use of Orwell to report on the state of Myanmar.

At one point, when he is up in the wild borderlands of the Golden Triangle he reports seeing currency dealers selling big coins - he describes them as being like milk bottle tops - which turn out to be 1840 East India Company silver rupees.

Now I've seen something similar in Laos with old British India silver coins being sold in markets - not for tourists but because the hill tribe people still view them as source of wealth.

My curiosity was piqued by this and I wondered wether the coins I'd seen for sale in Laos were the same as the 1840's coins Andrew Marshall mentioned.

So I Googled. And in the course found the best source of pictures to be ebay - when you think about it not surprising - coin collectors and dealers regularly trade coins and have to provide reasonable quality pictures of the items for sale.

The coins I had seen in Laos were later. 1840's rupees have a 'Young Victoria' head not inlike that one used on British coinage from the same period .

And then I noticed something slightly intriguing. The head on the half rupee coin is slightly different, indefinably slightly more Indian looking. The layout of the lettering 'Victoria Queen' is different as well.

If you look at the two images below you'll see what I mean - the upper image is from an 1840 rupee, the lower from a 1840 half rupee coin 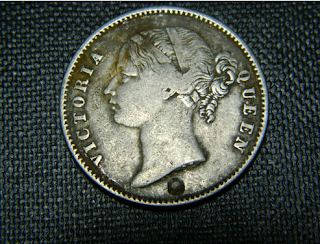 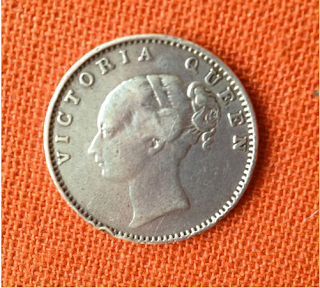 So, I'm guessing that they used different engravers/designers for the half rupee and rupee coins, and while they worked from the same illustration they produced slightly different versions of the same obverse.