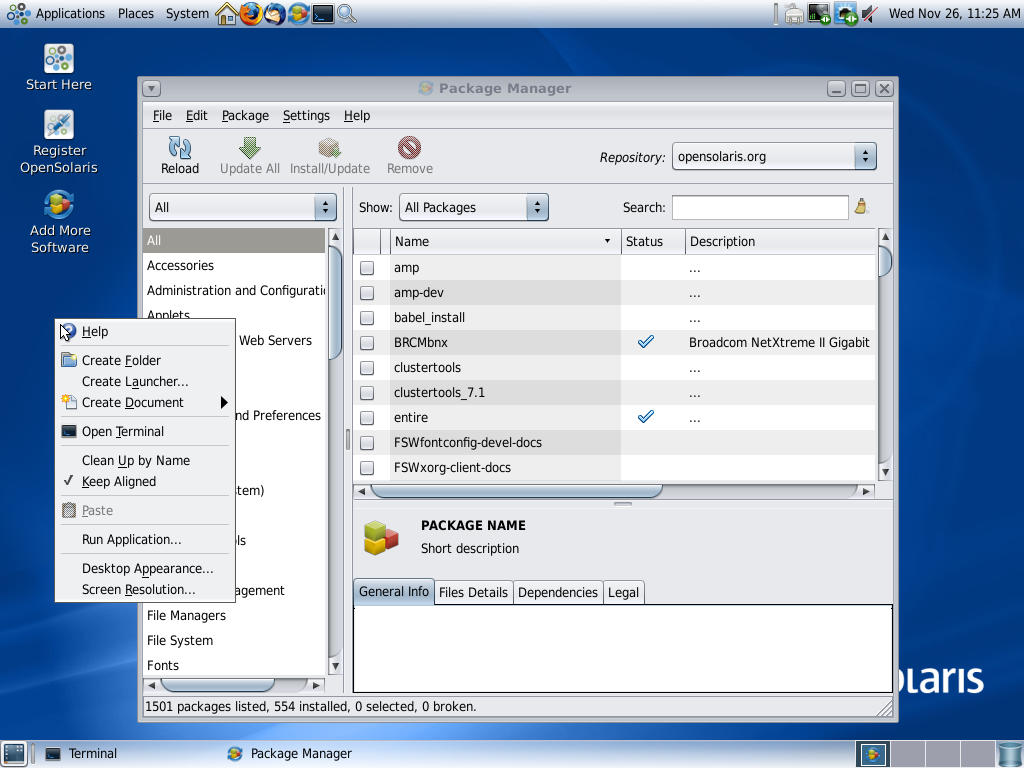 Way back in May, I built an open solaris install using 2008.05 on virtualbox.

And after some pfaffing around it worked pretty well, even if t was just another unix desktop. Could have been Suse, could have been Fedora. Six months later and, while it's still only rc2 and not the final distribution version I decided to have a go building 2008.11. This is not a like for like comparison, while I'm again building it on VirtualBox I'm now using version 1.6 and there's always the possibility that Sun have improved its ability to run OpenSolaris distros.

The live cd image booted cleanly, and the Installer to install the system to disk was clean, self evident, and runs well, and seems slicker than the previous version and was reasonably quick, with no errors encountered. Ignoring the false start caused by my forgetting to unmount the cd image, the boot process was fairly slick and professional looking with a single red line in a rotating slider to let you know things were still going on (that and the hdd light). Like many modern distros there was little or no information about what was happening during the process (personally I like the reassurace of the old startup messages).

The boot and login process was utterly uneventful, with the vm connecting strisght to the network (unlike the slightly annoying debian and suse extra mouseclick). The default software install was utterly standard and gnome like, and again open office was not installed by default - probbably because it won't fit onto the distribution disk.

The package installer is noticably slicker with more software available and is intuitive to use.

Generally, it looks and feels faster than the previous 2008.05 distro and somehow looks more polished and professional. Definitely worth trying and building on a 'real' pc. Like Suse it probably wants more resources than ubuntu and really legacy hardware might struggle, but on recent hardware it should be fine.
Posted by dgm at 16:44